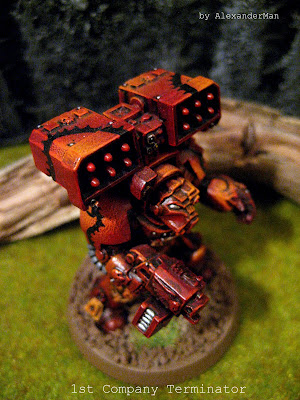 Bring out the Big guns... This one´s with Cyclone missile launcher. Really cool looking miniature. I don´t mean the paint job... but the miniature it self. 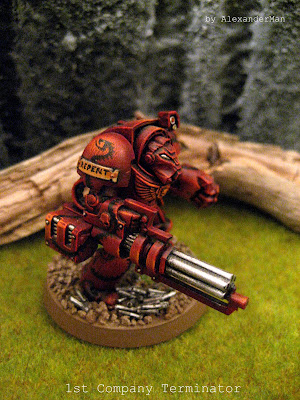 Always have your Assault Cannon close by... In 40k this is a very devastating weapon... especially against infantry units. (With Cannon you can :)) It can only be carried by Terminators or Dreadnought. I made the empty shells on the base from green stuff... 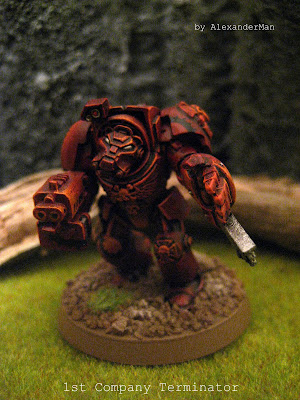 And one with Bolter and Chain Fist again... 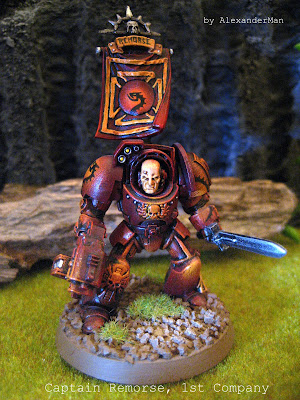 And here´s Captain Remorse. Chapter symbol painted on the banner... Painting job on this one´s Ok!
Posted by Alexander Man at 17:41 No comments: 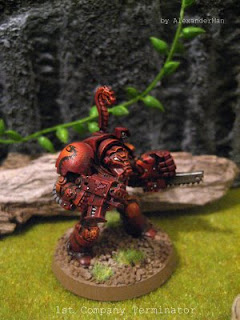 Here´s the first of the terminators... This one´s with a Chain Fist and a Storm Bolter. He´s carrying the Serpent symbol on his´s back. Simple cut and glue convertion :) The serpent´s taken from High Elf Spear man regiment box. On Serpents of Hellfire chapter colors I use Chaos Black under coat, then three layers of Red Gore, wash with very thin black, high light with Blood Red followed by Orange and yellow. Quite basic stuff... but I like the result :)
Chapter symbol is on the right shoulder...
Posted by Alexander Man at 17:17 No comments: 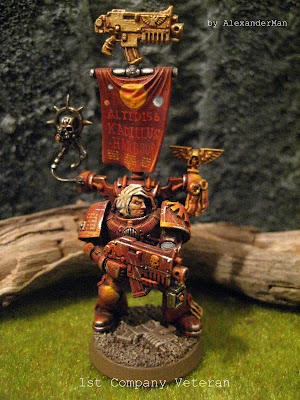 Here are a few of my Serpents of Hell Fire 1st Company Terminators and one 1st Company Veteran. The Vet miniature actually won the first price at local painting competition. (I got a set of those great new Citadel inks... Hooray!) Anyway... I´m happy with that miniatures paint job.

The banner on Vet´s back shows the greatest battles where his been playing hes Holy Bolter. "Altid 156" and "Kadillus Harbour" were both historical battles of Dark Angels. By writing the names of those battles on the banner I tightened the storyline of the "Serpents" as one of the Dark Angels second founding chapters. By this we can assume that "Serpents" were fightin in those same wars... maybe working on some secret missions, for there´s no mention of the Serpents been present in the official chronicles :)


The Terminators paint job´s aren´t that great... I had a crappy deadline on finnishing them. Actually some dude from Games Workshop Scandinavia sent me that box of brand new terminators to paint in colors of Serpents of Hell Fire. Oh... yes... Before that I had taken part in Games Workshop´s "Chapter Master" painting competition, where I came in 11th or... 13th... I don´t remenber anymore :) So I assume they sent those Terminator boxes for top20 painters (or something) to paint in Chapter Master colors. I sent the Terminators to GW... and got them back few months later in a little box... in many pieces... Maybe Terminators got in a battle :)

Posted by Alexander Man at 23:26 No comments:

Welcome to my blog 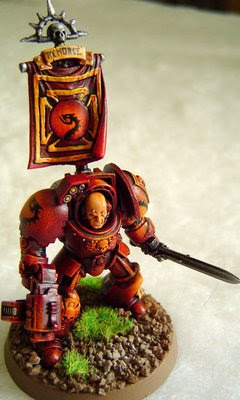 Just starting out this blog thing... I attend to fill this blog with some of my converted and painted miniatures from over the years. Here´s the first picture! It´s a Terminator Captain from Serpents of Hellfire Chapter. Painted a few years ago for Games Workshop Scandinavia. I dunno if they used it for any specific purpose... maybe they just took a picture of it. Anyway... they kindly sent it back to me... -in many pieces- after sending three e-mails to them. To be continued...