Descent Miniatures, Nanok of the Blade


Hi there! Just finished up Nanok of the Blade. It painted up lot easier than Vyrah the Falconer, I can tell :) I think this one had the best sculpting quality so far in my painted Descent miniatures. Here´s some pics...

Now my son has both of his Heroes painted :) Bye now!
Posted by Alexander Man at 22:04 No comments:


We have played Descent with my seven year old son for few times now. It´s amazing how fast he can learn the rules and the game terms, even without him knowing any English. I don´t use the full rules, but in every new session I will add some of the rules to our game. He has seen the Campaign games with our Descent Group, so he knows there´s a lot more in to the game... and he keeps askin more stuff every time we play. But I try to keep it simple, and add new things slowly. Today he corrected me two times with the hero skills and dice rolling... for I counted some results wrong :) Oops!


Vyrah the Falconer is one of the Heroes he likes to play with (the other being Nanok of the Blade). So today I decided to paint it up. Sculpting of the mini is really good job, but some of the details are so microscopic, that you just have to dig them up, like a archeologist...


So, occasionally the mini was quite painfull to paint. But in the end, it was rewarding to get it finally done. And I think the result is allrighty, for one evenings job anyway...  I was supposed to paint the mini completely as it appears in the Hero Card (as I´ve done with the previous hero minis), but I had to make some changes this time with the color tones and choices, for my taste the original picture was too much "carneval stuff" with all bright yellow, red and green. :(

I´ve already started with Nanok of the Blade, so I´ll be back soon with that... Bye now!
Posted by Alexander Man at 00:17 No comments:

Our Road to Legend Campaign is getting close to silver level now... Previous "rumour quest" was at Guardian Hills, where heroes slayed down the ghost of Captain Jones and his minions (X-Marks the spot). 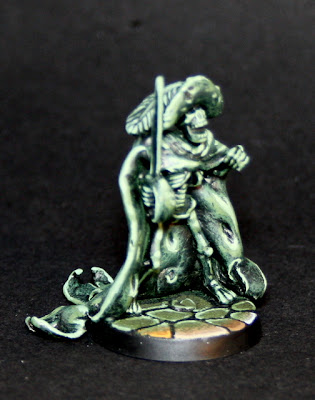 After a long and hard battle they received gold and experience of course, but also "The Backbiter" long bow, that seems to be a dangerous weapon in hands of agile Grey Ker. 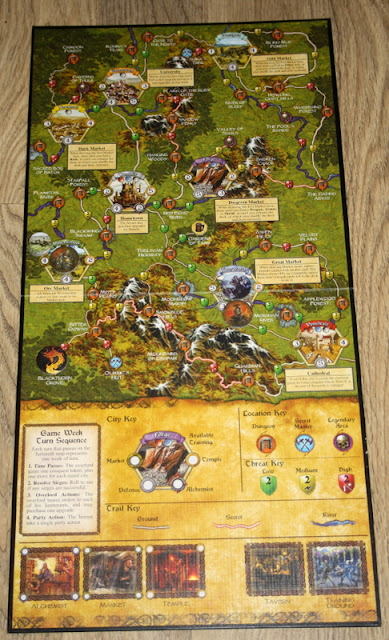 While training and well earned R&R in Vynelvale, Spirit Speaker Mok (one of the heroes) wandered to the local tavern, and payed for a round of drinks... and learned a new rumour, as a young woman walked over to his table. He asked somebody to help and rescue her husband from a evil sorcerer who´s tower´s located in the Gardens of Tarn. Heroes desided to help the poor lady, and started their journey towards a new adventure.

Meanwhile... Gates of the Witch Kings keep opened at Blackthorn Grove, and Liutenant Meric Farrow rode out like a bat out of hell with his minions. He travelled fast, over the Mountains of Despair, while his brother Sir Alric Farrow besieged the city of Dawnsmoor (for a while now), trying to raze it (he just can´t pull it off :).  Meric catched up with the heroes at Riverwatch. 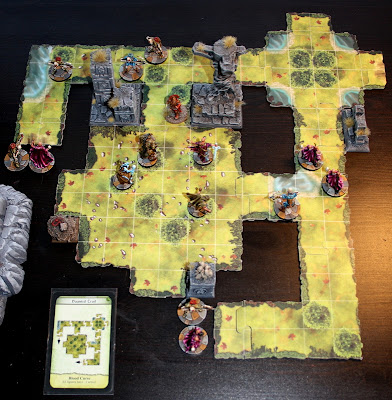 Merics intention was to follow the group and "fortify" the next dungeon the heroes would explore, (Giving the Overlord extra 15 threat points in Merics case) so he didn´t attack. But the over devoted heroes drew their swords and axes, and charged... And the battle went on for the rest of the game night. Mok was the first hero down, pierced by the accurate skeleton arrows. And for there´s no spawning back to the board in Liutenant encouters, heroes now started to drop down one by one. Meric was badly wounded by the group, and Steelhorns (one of the heroes) came very close to axe him down... but the evil minions were too many. Steelhorns made an outstanding fight using his "Cleave" skill, cutting down over a dozen enemies. But he finally ran out of fatigue points, and was pierced by too many arrows... So, the next sessions begins in Tamalir, where the "Obelisk of Journeys" has transported the fallen heroes. To be continued...

Posted by Alexander Man at 18:49 No comments:

Hi there! We´re having a game of "Road to Legend" this coming friday, so I wanted to make something new for the players and maybe finish some Descent mini projects before that... We´ll see if I got the time. But this is what I got done last night :) 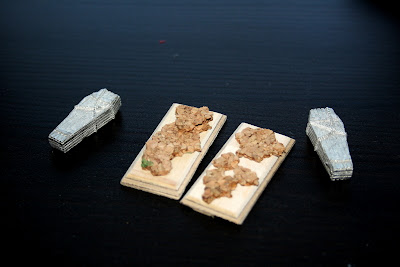 I unpacked two Malifaux Coffins. Then I based two Cavalry Bases (made out of plywood) with cork. 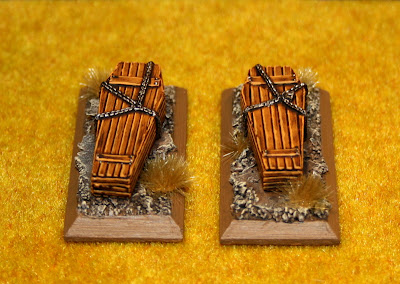 After sanding the bases I primed them, glued the coffins in place and gave the whole thing a rough paint job... 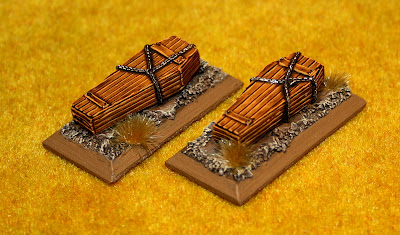 And added some Mordheim Turf. Ready for dungeon... 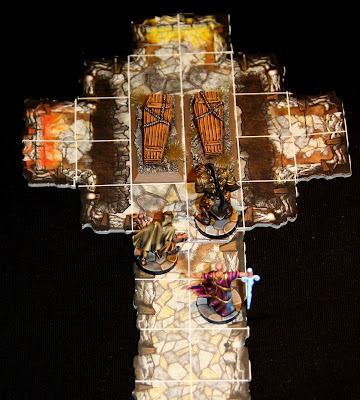 They look ok in the right atmosphere :) And add more feeling than the cardboar props. Even if the Descent cardboard props are very good looking, and have really nice art work. 3D is 3D... Bye now!

Rune Quest 6, I finally got it!

Hi there... Yesterday I wondered to the local hobby shop, and there it was... A Big, lonely book sitting on the shelf, calling for me.  And I brought her home. The price tag was pretty heavy to bear, but I got 450 pages of brilliant Rune Quest stuff to study now :) 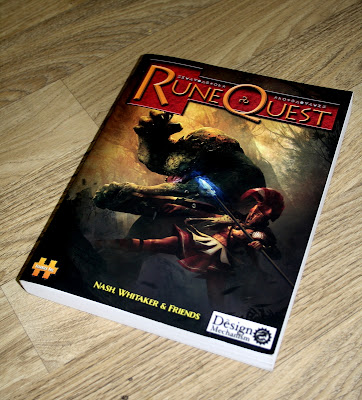 Havent got far yet, but so far it´s pure enjoyment. I expect it to be brilliant all the way to the last page... Here´s a link to the RPGnet´s review, for I havent got my own opinion formed... Bye now! Got to read :)

Posted by Alexander Man at 21:04 No comments:

Hello! I´ve been little busy at work and other things, so there has been almost nothing happening on my painting table... But I managed to paint these two Pirates to rank&file standard.

I was asked for some tutorial of how I paint the pirates... There´s no special tricks in the paintjob, just the basic stuff. But here you go anyways... Back to basics :) 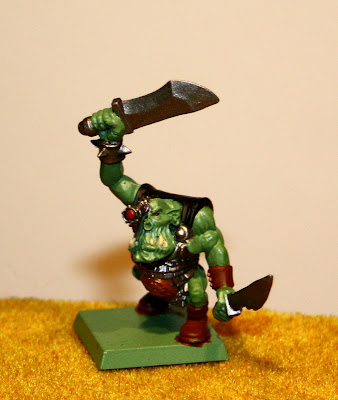 I have used Army Painters Goblin Green for primer. Mournfang Brown for boots and leather parts, Leadbelcher for metal, and a mix of Burnished gold and Mournfang for the buckle of belt. 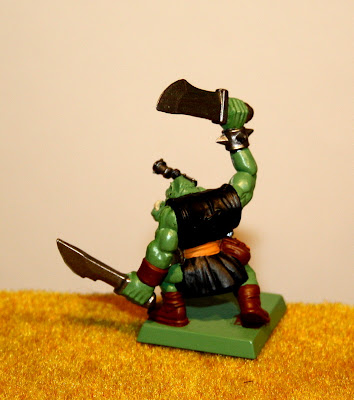 Tau Light Ochre for the belt and some Ushapti Bone on the teeth and nails... And the base colors are done. 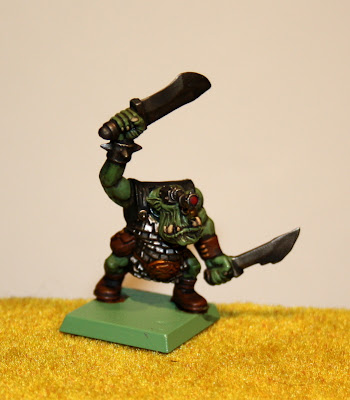 For washing I used Agrax Earth Shade for greenskin parts, and Nuln Oil for leather and metal parts. I used two layers in parts I where I wanted more shadow. 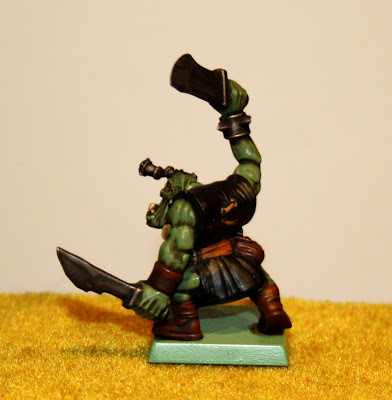 Same stage from behind... 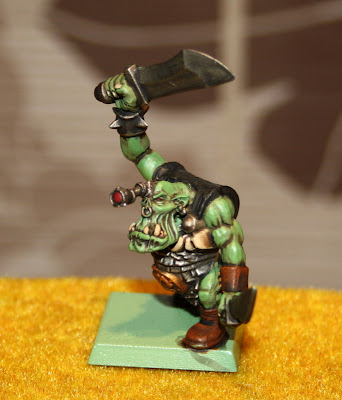 First highlights for the skin. I used the Warboss Green with the first layer... Left the washes to shadow the lines between muscles. 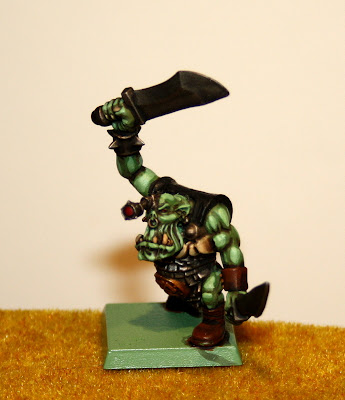 For the second layer I used 2:1 Warboss Green and Ceramite White. I left the previous layer to show abit from beneath. 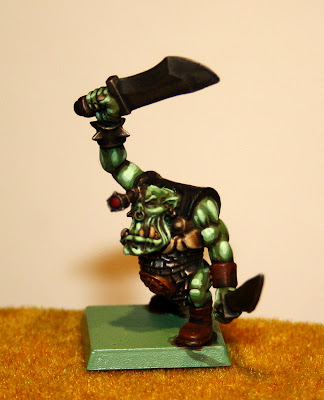 And same thing again adding some white to the previous mix... almost 1:1 now. Just painted some fast dots with that mix actually. Looks good enough from other side of the game table :) 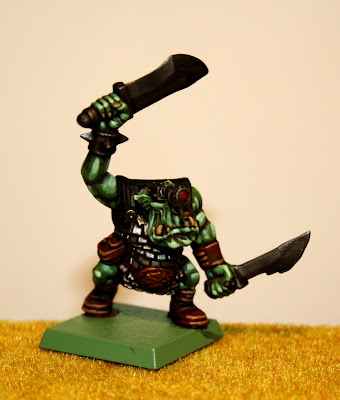 Now I highlighted the leather parts with 2:1 Mournfang and White. Painting just little lines on edge of everything with it... 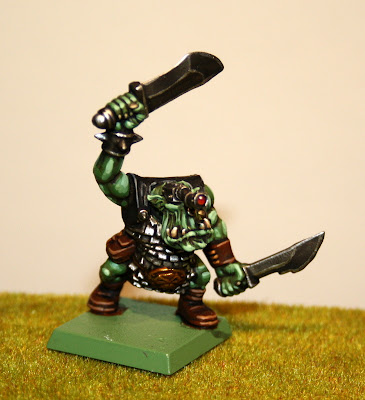 And now I did the metal parts with Runefang steel. Just thin lines on the edges and some dots here and there on the armour. Buckle of the belt was highlighted with small lines Burnished Gold. I painted the lower part of the "spyglass" with Blood Red, and added a little dot of white on the upper part. 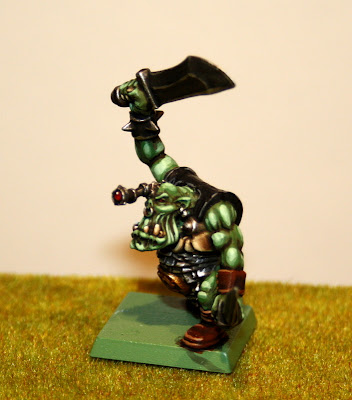 Little bit Dawn Stone on the black parts and that´s it I guess... Ready for battle. (Except the base job) 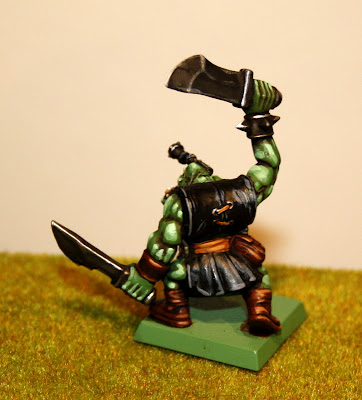 Finished mini from the back. 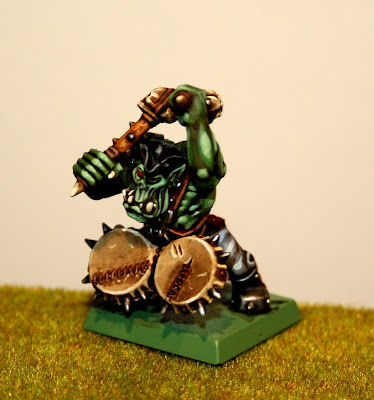 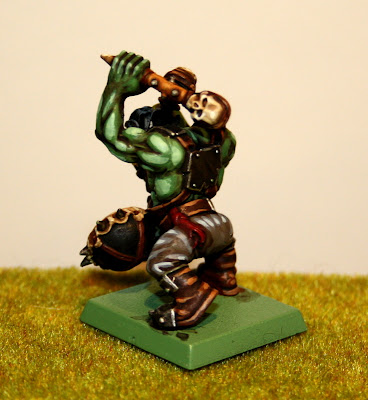 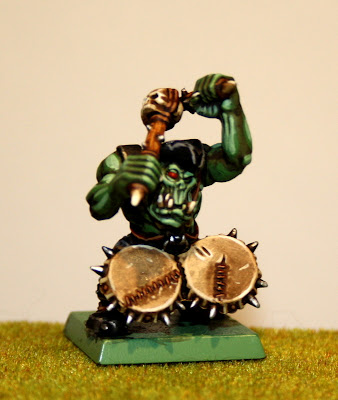 Posted by Alexander Man at 18:58 No comments: