So... I finally finished the Wolf Riders. The first six miniatures anyways. Now I have to go and buy some more LotR Wargs to make a full unit of twelve Riders. 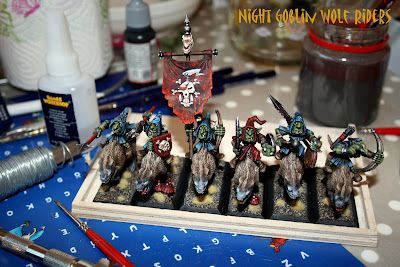 I really tried to work as fast as I could with these fellows. So I used about six hours per mini. That includes converting, repositioning of the limbs, painting and of course basing. For me that´s really fast :) To be honest, the standard took me about six extra hours to paint... 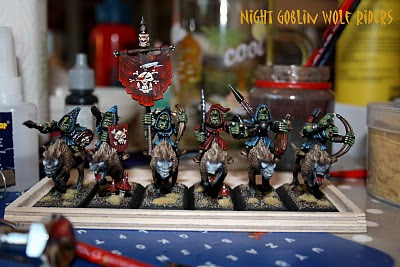 I think my home made bases (actually made them at work) look pretty nice with the sand and dead grass. The gobbo on the left side is on original GW cavalry base, but the rest of the unit are on home made. You can see that the original is little lower... Otherwise the measures are the same. 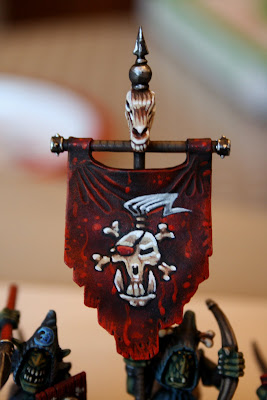 Here´s a closeup of the banner. At first I was just gonna leave it red with the blood drops dripping down the banner. But it was too Vampire Counts look alike, and made the unit look too serious, so I decided to paint it as a goofy pirate flag that suits my army theme. I think the Orcs and Goblins army is the last funny army in the Warhammer world nowadays, so I try to keep that image up :) I tried to make the skull look like Captin Morg´n miniature, with the eyepatch and hair style. 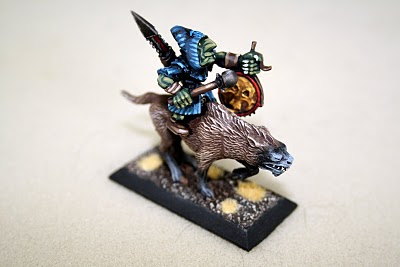 I specially like the musician mini Banging the Gong... I made him carry a mean looking heavy spear on he´s back too. 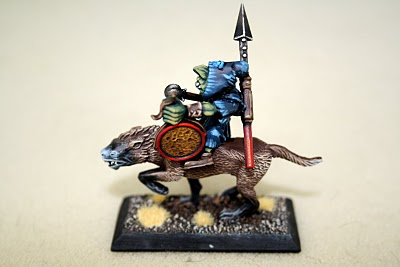 It´s been some time since my last post. I´ve have painted a lot, but haven´t found time to post anything :) Wolf Riders are ready, some progress with the Sword Masters, Captin Morg´n almost finished and I took part to local speed painting competition too... Lots of stuff, but now few pics of dear Capitano! 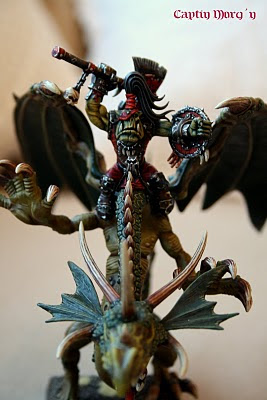 If you´ve been reading earlier post´s, you can see that the banner is gone! (It´s coming back later) I wanted to change Captin´s pose a bit, so I removed the old arm and added a new from Orc arrer boy. I attached the shield to the back of the arm and made the strap from Green Stuff. And the old head is gone too... I really liked the previous one, but it wasn´t Piraty enough for me :( So I decided to switch the head with WH40 000 Green skin that came with White Dwarf magazine some time ago... It has eyepatch and everything :) Funny I didn´t come to think of it earlier. 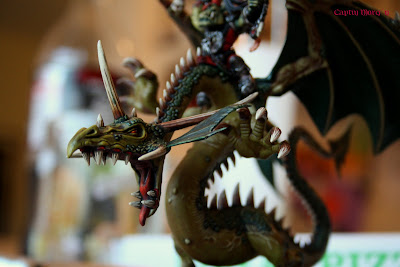 The Wyrm is now finished painting. I really like the sculpting and pose of the head. Looks nasty and baity. "Chomp chomp" 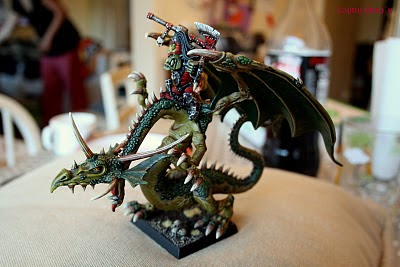 As I mentioned, the banner is coming back later... Hopefully this weekend :o. It´s gonna make the mini look even bigger and more threatening ( I hope ). 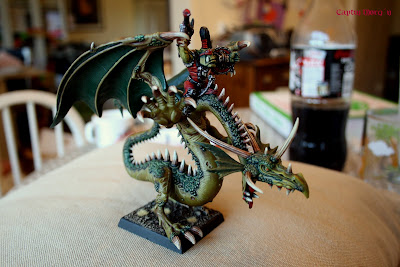 Next time when I have the chance to play WH I´m definitely going to put Capitain on the table. Just afraid that hes gonna receive "everything" on the shooting and magic phases :) 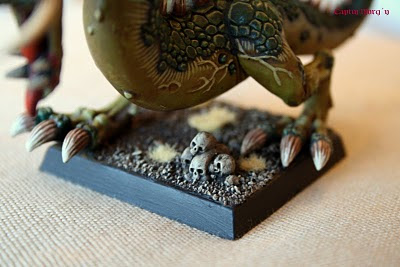 The Wyrm is crapping skulls...

And finally something else that I´m gonna squeeze in to this post...
I took part of local speed painting competition. I was really surprised to win the first prize, for the speed painting is really not my thing. Or at least it wasn´t. This competition really opened my eyes for new way of painting. I have always tried to make every miniature look as neat as possible, with all the details painted, shaded, high lighted and so on... In that way I´m not gonna finish painting any army in my life time.
Anyway... now I noticed that fast painted minis can really look good even if all the details are not painted. And who´s gonna see the missing details in my vast unit of 40 goblins for example. I see and know of course, but no one else doesn´t even care!

So... We had one hour to paint two miniatures. We could choose what to paint from the minis that the store had prepared for us. I was lazy and picked two of the new Skull Pass gobbos... They seemed to be the easiest ones to paint :) Never has one hour felt so short. I didn´t have time to paint the belts or even teeth for them, but I managed to get a result that pleased me, and surprisingly, the judges too..! 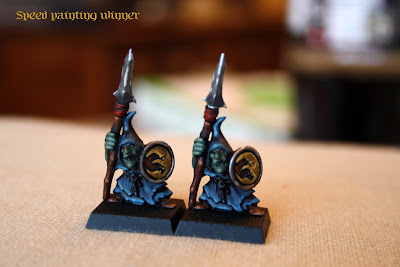 Now I´m impatient to get my gobbo horde on the painting table, and show them some speed brush!
Posted by Alexander Man at 21:31 2 comments: