Here´s my other Liutenant for Blood in the Badlands campaign, Sneky Git of Eight Peaks... or actually Sneaky´s map token. It´s made out from a snotling. I added some green stuff wargear (check my earlier postings), and painted it up. It came out pretty nice :) 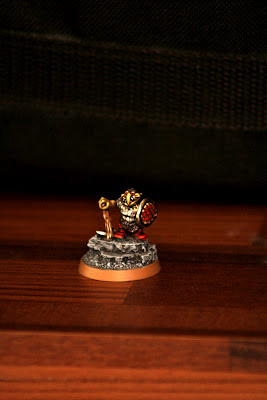 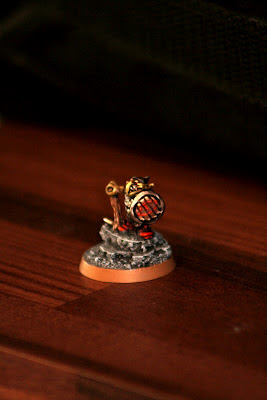 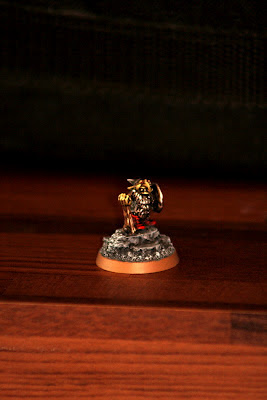 Here´s a great link to a long list of lesser known miniature ranges and companies by Hephseto´s Forge! For me this was a treasure found in the blogisphere... There´s so many manufacturers I´ve never heard of. Only downside here is, that now I have a long and expensive list of "must have" miniatures in my pocket, for Wargaming and RPG use :)

It´s great that some bloggers has enthusiasm to go through this much of trouble, as Hephesto´s done in this case! Cheers..!
Posted by Alexander Man at 10:42 1 comment:

Blood in the Badlands: Campaign turn 1

Hello... Quick look at the Blood in the Badlands Campaign we started with friends a while ago. I´m playing Greenskins this time. The other races of Badlands are Dwarfs, Empire, Chaos Dwarfs, Wood Elves and Skavens. So far we have named our generals and liutenants, and choosed our allies and enemies... Few battles have been fought, but my first fight (against the woodies) is still unsolved. I have played just once against them before, and dont actually know what I´m against... But I´ll smash them to bloody heap anyhow :)

Here´s how the Badlands look like at the spring time... first map turn. 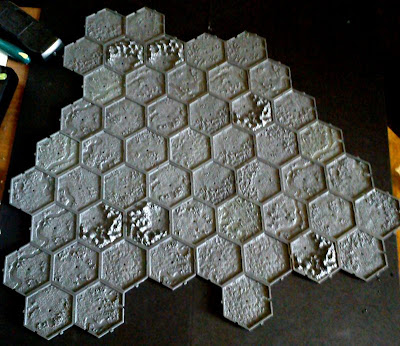 And the same with colors... 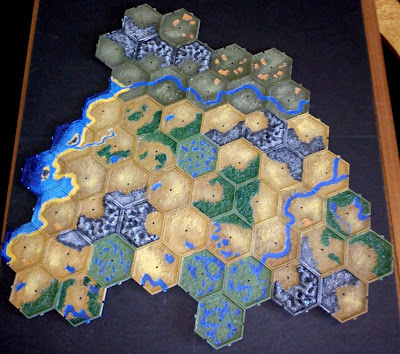 Ahhh... that´s better. My friend made a really good job with the map tile project I think... 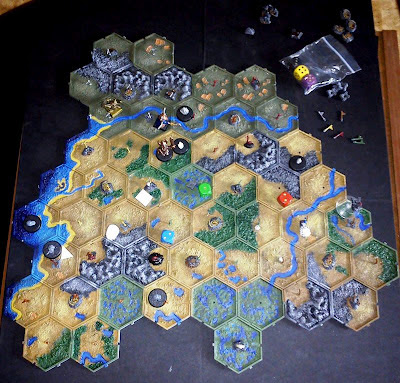 And here are the armies... My general and liutenants are in the middle represented with dices... That´s gonna change soon (read my earlier postings). I´m controlling only the Stormhenge so far, wich is a quite valuable place... I can sacrifice my enemy prisoners there, to gain some campaign relics. Dwarfs are pressing from the north and wood elves from south, but theyre gonna get some choppas in the fore head for sure... From random events table, one of my Liutenants found a magic item worth 20pts... that was nice, for I get to keep it untill the hero falls in the battle (not gonna happen). :)

Wood elves got a spy from the events table, so I have to reveal my armylist before the oncoming game... Might as well put it here, for whole world to see. I´ts a really experimental 1500 pts list :) I´m planning to shoot the elves to fewer numbers and then hack them with choppas... Simple and simple :D Here it is:
Ormgod da ’Orrible´s Warhost

Posted by Alexander Man at 19:14 No comments:

Blood in the Badlands Campaign Tokens

Really fast update! Here´s my Liutenant map counters for the ongoing Blood in the Badlands campaign... 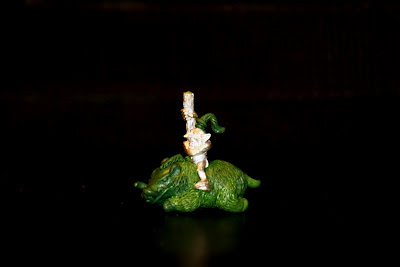 This is Ormgod da 'Orrible... Savage Orc Warlord, riding a boar. My sculpting skills are not so good... but yes it´s supposed to be a boar. And I made one of my metal Snotlings look more Savage Orc like, with little bit of green stuff. 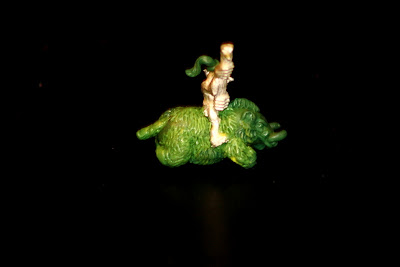 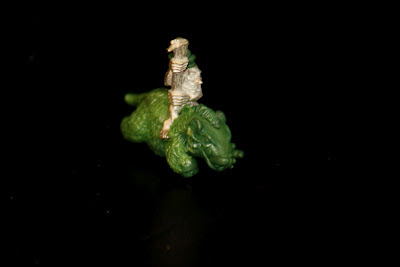 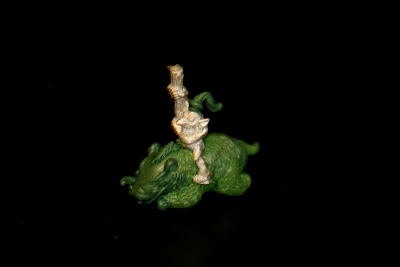 I´m waiting to see how it turns out painted... 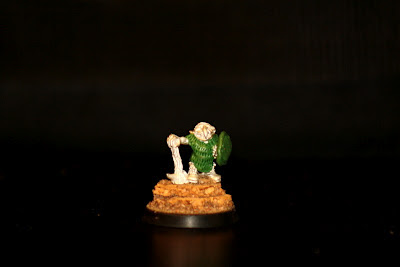 And here´s another Liutenant... Sneaky Git of Eight Peaks. Also a metal snotling with some green stuff wargear.

I´ll be back with these after some painty time :) Bye now!
Posted by Alexander Man at 15:36 No comments:

Hello! Just a quick posting this time... Our Blood in the Badlands campaign started a while ago. I havent played any battles yet, but the first game is going to be against Wood Elfs. Arrows will shadow the sun :( I´ll be reporting the highlights and some battles... and the map action every now and then. I bought the campaign book too, and it looks really promising! Lots of blood will be spilled in the Badlands this year :)

This posting is about map counter I made resently... for my general and liutenants were just different color dices on the beautiful campaign map... :( I had to make a change to that. So here´s my Orc General Ugg of da Wyvern Cliffs map counter! 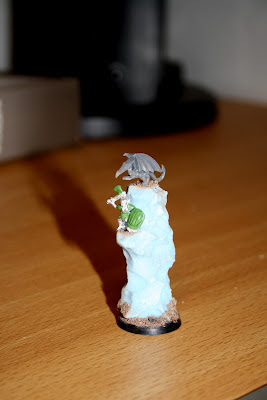 I don´t have any Warmaster minis, wich would be great for this purpose... so I desided to use my snotlings to represent my general and liutenants. I made a "cliff" out of foam, took a tiny dragon from my High Elf minis (as a wyvern), and used some green stuff to make the snotling look little more Warboss like :) 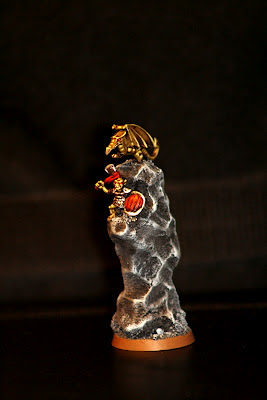 And here´s the painted Ugg of da Wyvern Cliffs... and he´s companion, the Baity Thing. 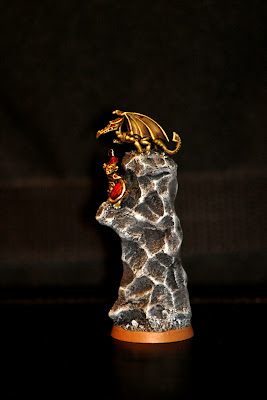 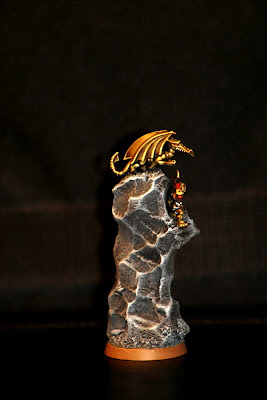 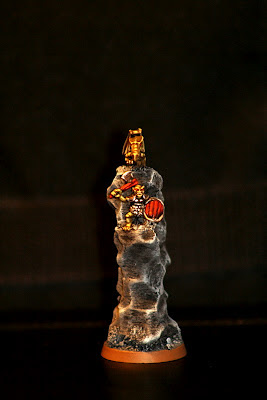 It´s better than a blue dice on the beautifully painted Mighty Empires map... "Cheers Nasu" for the paint job on the map tiles! I´ll be back with more campaign stuff later. Bye now!
Posted by Alexander Man at 17:38 No comments: