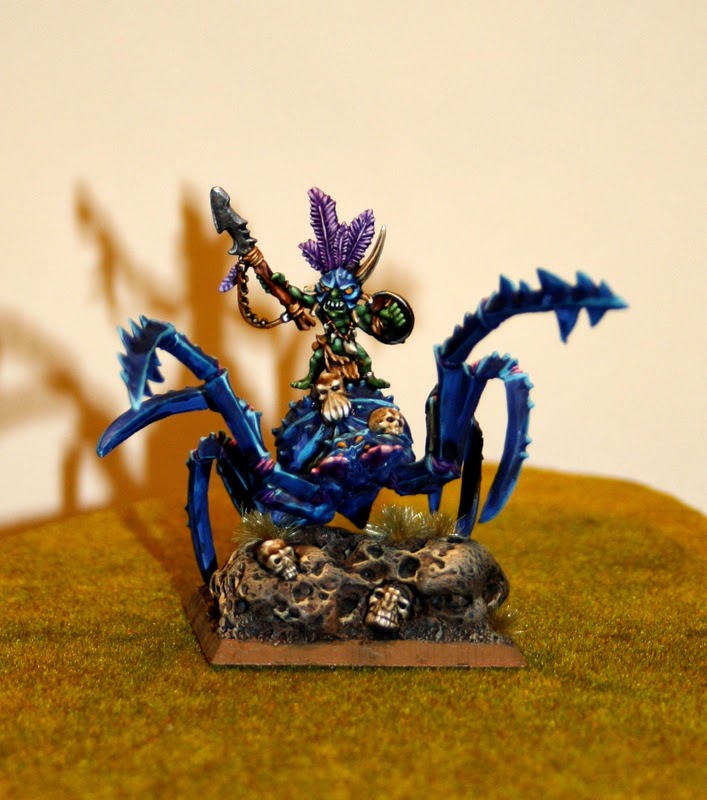 Hi there. In my last two Fantasy Battle games, my fast cavalry units have been proven worthy of their points value, and more. So now I'm happy to get this bad Gobbo ready for action, and give some needed support for my Spider Riders. Down side is, that Gigantic Spider is not "fast cavalry", so if you put it in the unit in deployment phase, you'll lose the vanguard move... and of course all the other fast cav rules. But it has the same movement of 7, so you'll march pretty fast on the other side of the table with this one. 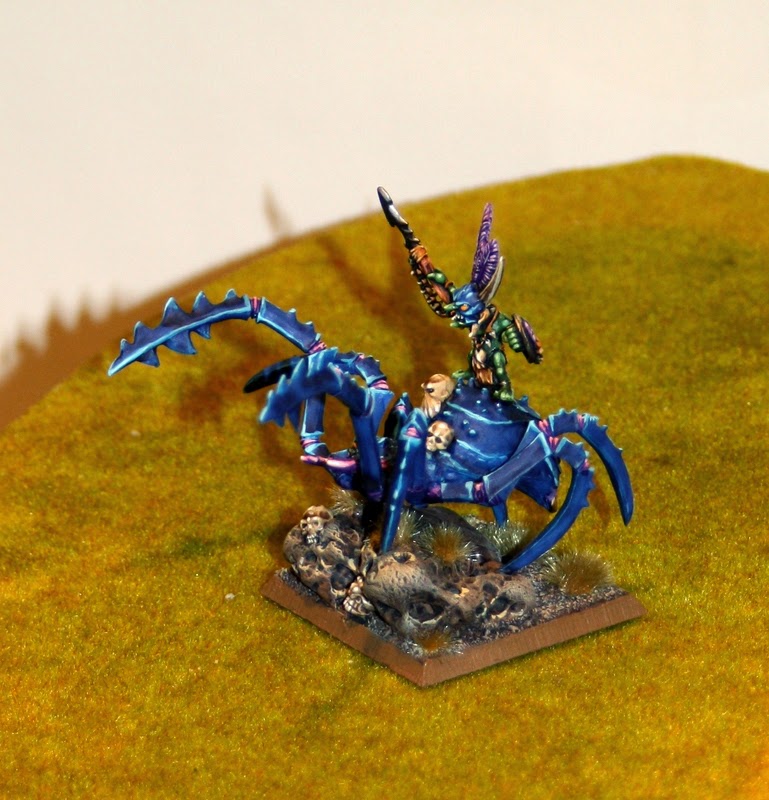 Goblin Big Boss with Gigantic Spider + hand weapon, shield and light armour can be had with 79pts..! I think it's a bargain for a lonely warmachine destroyer, or a boost in a Spider Rider unit. Spider is thick skinned, so you'll have a save of 3+. You can crawl and stride through everything :), and you "cause fear". 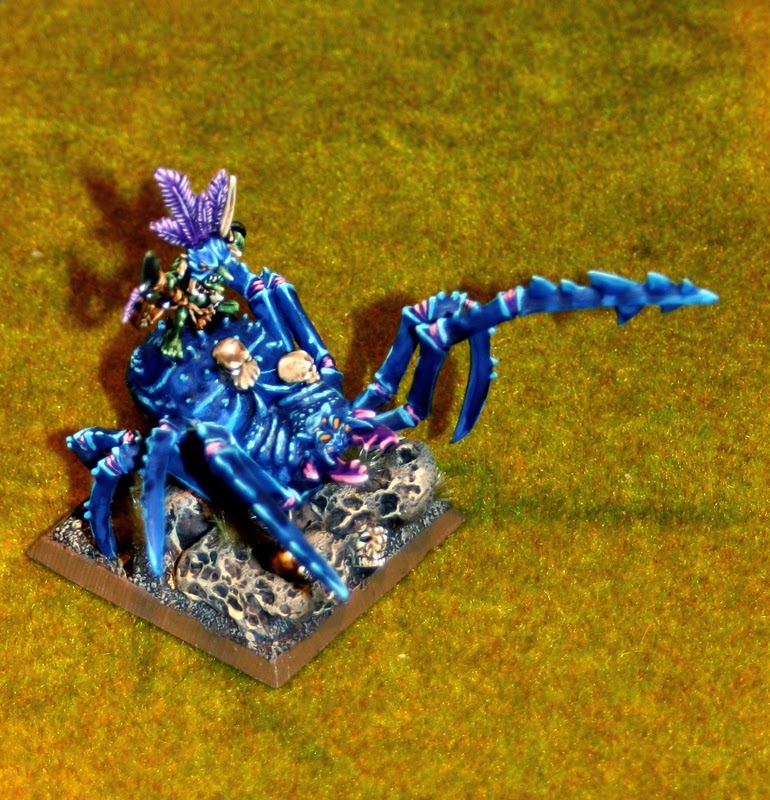 And don't forget about the spiders poisonous attacks. Gobbo itself strikes three times, with WS4, S4. So six attacks all together is more than enough to wipe out a war machine crew...(well, Dwarfs have proven to be kind of stubborn every now and then...) 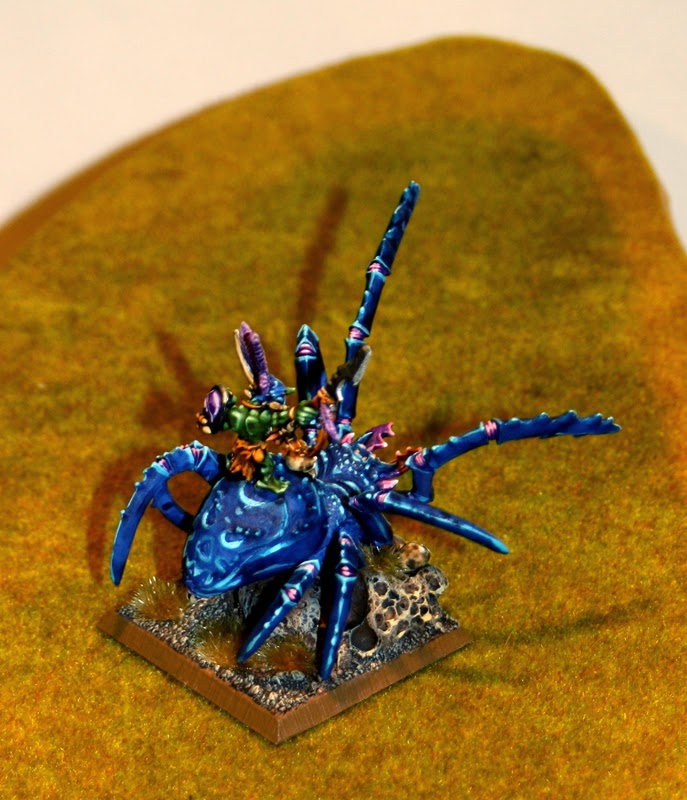 And that's all I have to say about game terms... Mini itself was fun to paint, and it did'nt feel like alot of work at all. I left out the spider web throne, and basing material that comes in the box. Web stuff is really great add to the mini, but I wanted to give all attention to the hero alone. 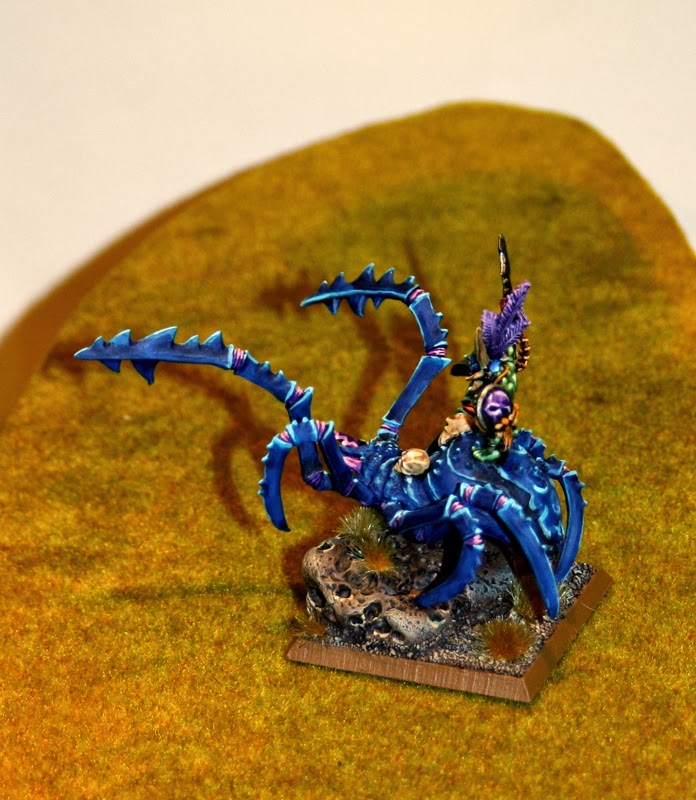 In the base I used a rock that I found from a beach in Greek. I collected alot of them, so you might see them in my future postings too :) 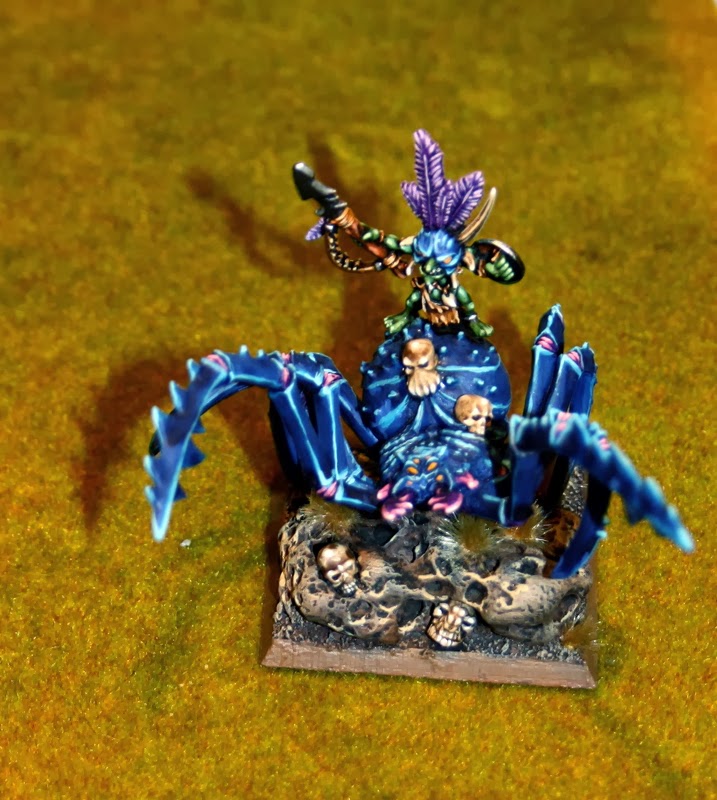 I think I'll add some more skulls on the spider later... I was going to do that in the beginning, but I ran out. You can never own enough skulls... 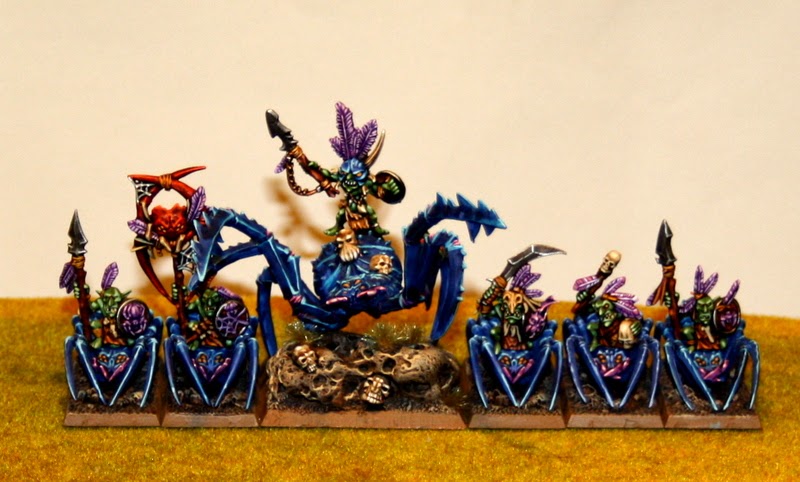 Model also fits in the unit nicely... Thanks to the high basing. Bye now!
Posted by Alexander Man at 21:47 2 comments:

A True Gift from the Chaos Gods

Here's a piece of work... that I made as a Christmas present for my friend. I'm a bit late from the schedule, but they say that it's better late than never ( I'm not sure in this case ). The paint job might be sloppy, but the piece itself brings up my skills as a convertion wizard ( shmizard ), and my sophisticated sense of humour ( of a six year old )... 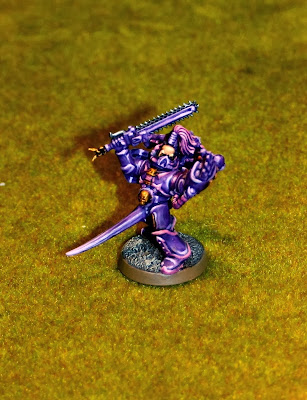 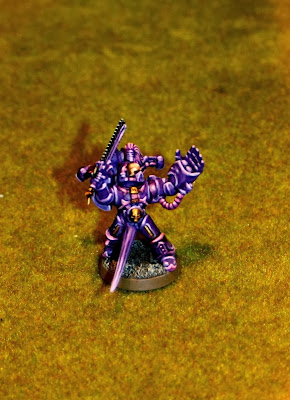 Sorry about that... Bye now!
Posted by Alexander Man at 18:38 No comments:

Hi there! My Wolf Rider unit worked as a dream in my last game against the Dwarfs. They got two warmachines down, ran the Master Engineer out of the table, and supported from the rear, as I finally got to charge the Dwarf infantry with the rest of the Green Skins. So they did alot better than I hoped.

So, inspired by their triumph, I dug out my Goblin Shaman with Wolf by Game Zone Miniatures, and did some painting on it. This fellow hopefully brings some boost to the vanguard in the next game... Or it sucks the whole unit in to wortex with a brilliant miscast :D 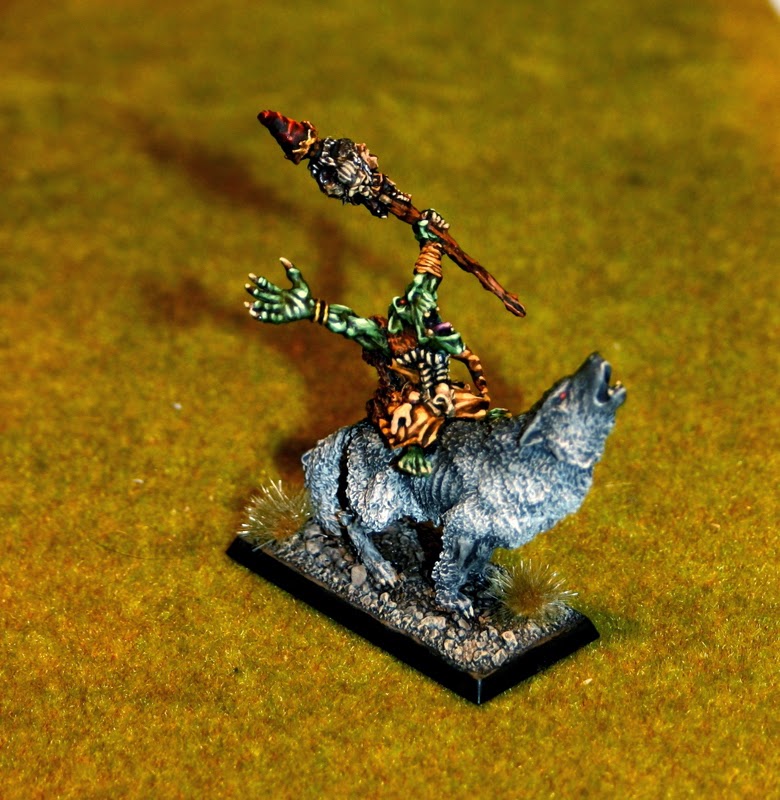 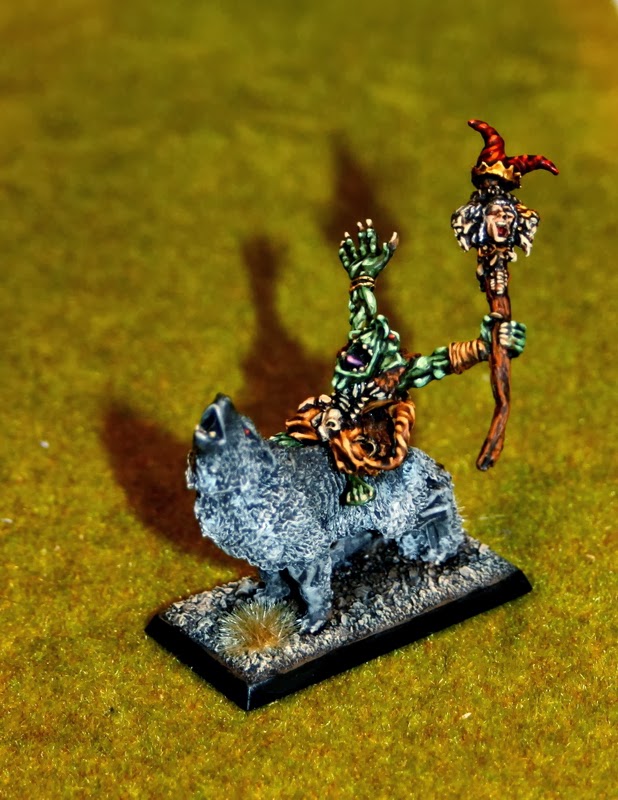 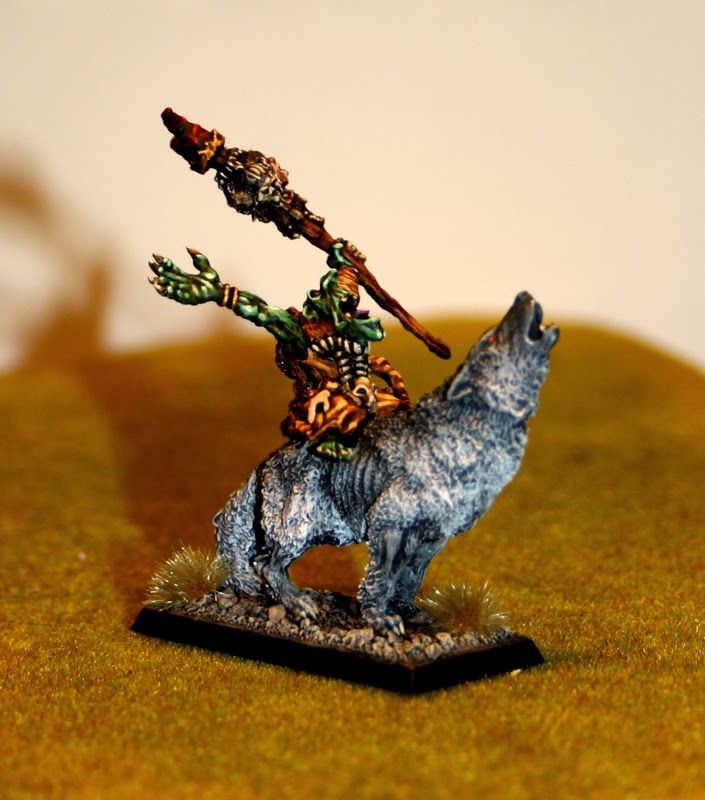 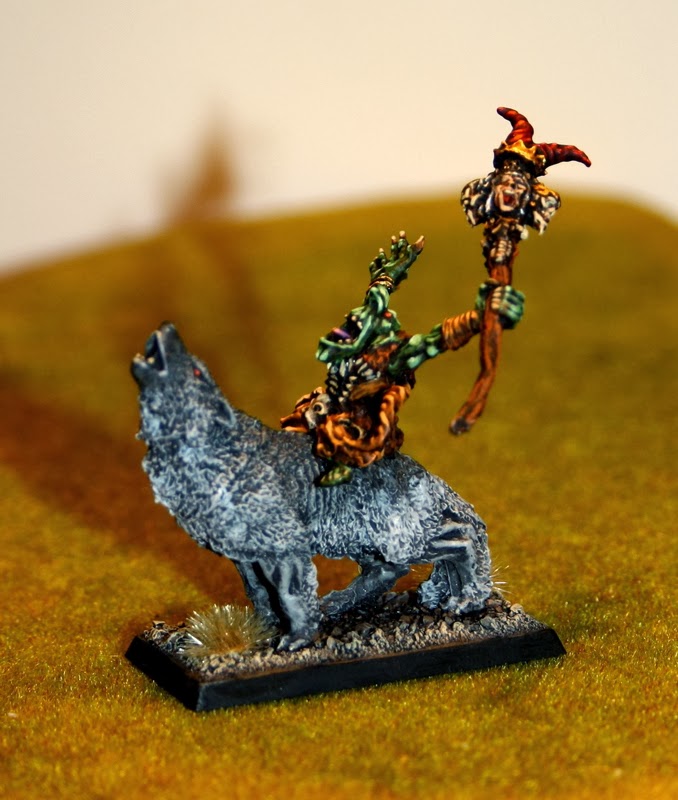 Really nicely sculpted model, but not very nice to paint. Some details were hard to dig out. Still, I like alot about that "howling at the moon" theme in the model... Bye now!
Posted by Alexander Man at 00:28 2 comments:

Hi there! Been awhile since the last update... I've been lazy with painting at Christmas time. I finally managed to get something done, for I have a WHFB game tomorrow, and had to assembly one unit for it. I used bitz from Orc Boyz regiment box, Black Orcs, and of course some boars that I've been buying from here and there along the way. Here it is... 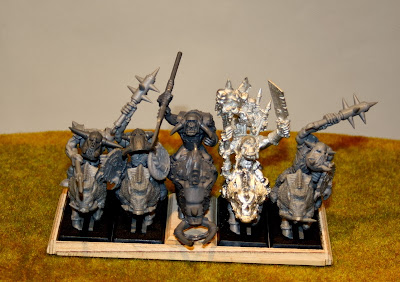 This is the first rank. Middle model counts as Boss, the one on he's right counts as standard bearer... still have to make a  musician at some point. 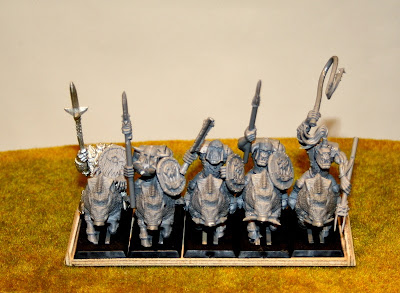 Second rank is more balanced. Only the Orc on the right end stands out... it's from the good old chariot set. One on the left is actually a "real" metal boar boy :) 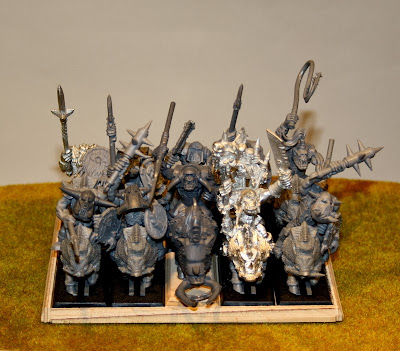 Here's the whole unit of ten. Now I just have to grab the paint brush... Bye now!