Ok... As I mentioned earlier, first rank is almost ready :) (I´m slow as a turtle... and not talking about those ninja turtles...) Actually I´ve been working on too many interesting miniature projects at the same time. For example making Hell Fire marine scouts out of old 40k dwarfs... 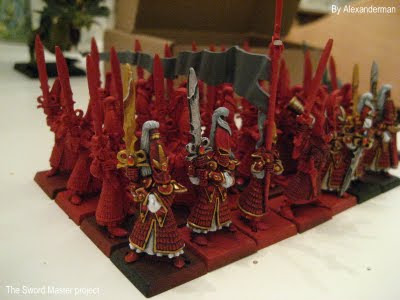 I take better pictures of miniatures when the whole first rank is ready. These pictures are mostly about that Standard bearer... or actually the banner his holding. I took it from the High Elf dragon box. It was quite a project to get it fit between the Sword Master ranks, but I think it was worth it... That´s gotta be the biggest banner yet :o At least in my armies. 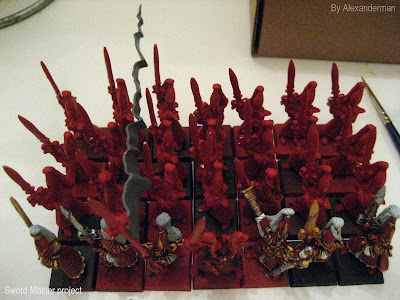 Now I just got to think a theme for the banner picture and it´s colors... Damn. I think I´ll keep it simple...
Posted by Alexander Man at 12:04 1 comment:

Here´s a funny one... I got the miniature from very old GW plastic wizard box. There were many different empire wizards, from different schools of magic (I guess). I took this one for my Mordheim Shadow warrior band, for they were missing a mage...

Little bit green stuff to make the pointy ears, and I cut off left hand to add a Enchanted Horn that mage found after one battle... ( I dont remember the powers of the horn anymore, but it was better than Boromir´s ;)) 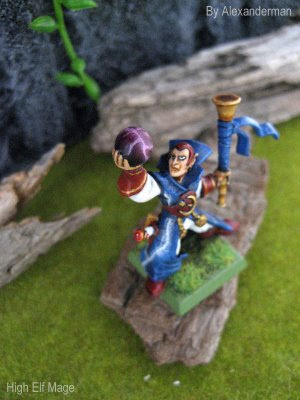 Painting was a little bit hasty, for there was going to be a game next day... It looks little more like a Marvel Super Hero, than a High Elf mage to me... at least, at the time, I was happy with the
paint job on the crystal ball :D "To be or not to be..." 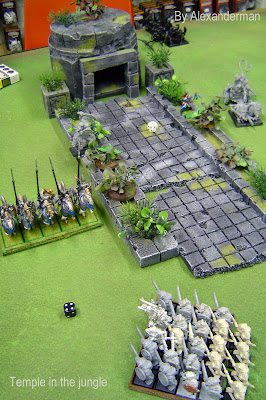 Here´s the Mage running after War Boss on a boar, that cunningly manouvered at the back of the Silver Helms... (He´s there... in the bushes) Picture is taken at the local Fantasy Games shop, were we were playing a battle with four armies... I have made this piece of scenery too... which is pretty much the reason I publish this picture :) The Silver Helms are not painted by me. I was just borrowing them for the battle... They are pretty cool unit I think! 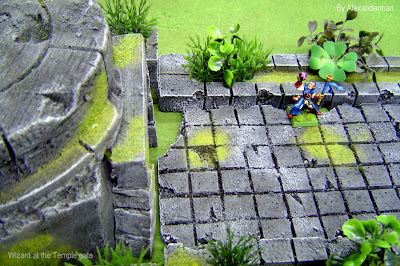 Now he´s out of the bushes, after blowing up that War Boss on boar, with a Lightning spell... that left only but a pair of smoking orcy boots and a roasted boar... "Badoom!"
Posted by Alexander Man at 22:34 No comments: 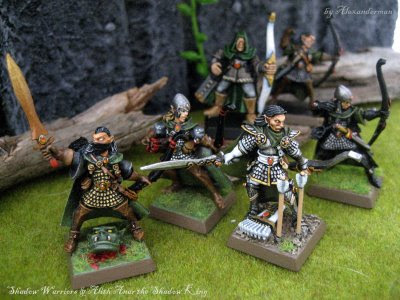 Here´s a band of shadow warriors, Alith Anar as a leader... Alith Anar is lightly converted from high elf hero miniature. I took of the shield from left hand and added a bow. Some arrows to the base was a nice detail I think. I tried to make him look like he´s waiting for a enemy charge... Sharp eyes can see that really old wood elf model at the back ground... From 80´s or something :) Planning to convert them to shado warriors too... I allso like that orc head at the base of the champ :O
Posted by Alexander Man at 20:02 1 comment: