Hi there! I found little time for hobby again, and I used it to update my "Serpents of Hellfire" Vanguard Veteran Squad. I replaced the old backpacks with the Iron Pattern Jump Packs that I ordered from Maxmini. Now they can make the Heroic Intervention... And they look massive cool (Well, bigger anyways :) 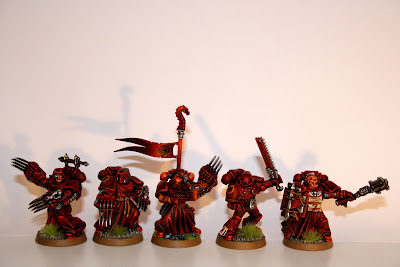 For comparison... Here they are with the regular backpacks. Deadly and effective group :) 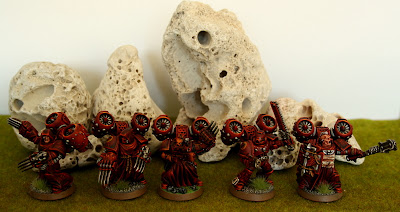 But now they can also fly... and arrive into middle of action when least expected :o 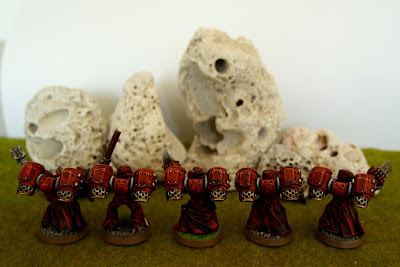 The Jump Packs are huge and I really love the sculpting. The price of 7.35€ for five of these is not bad at all. 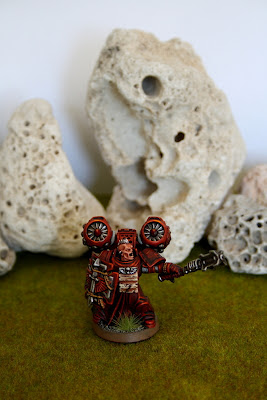 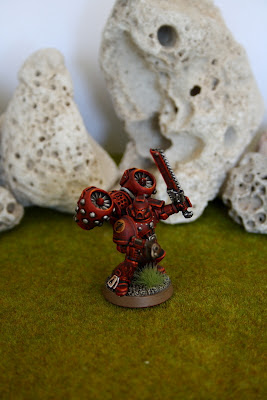 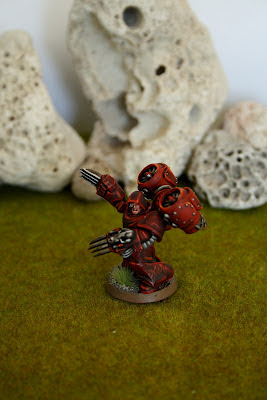 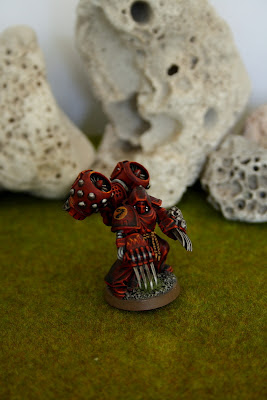 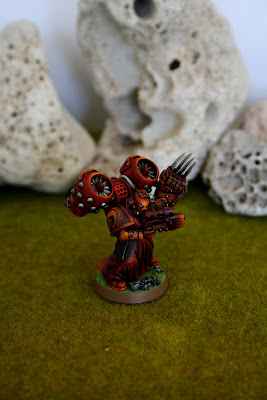 The mini in the last pic looks different from others, for it´s older painting job... I used to drybrush the Chapter armour colors. I had to change later to a faster technique :) Anyways... That´s all folks! Bye now!
Posted by Alexander Man at 23:21 No comments: 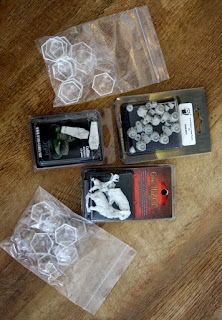 Twenty flyer bases... Mostly for Epic 40 000 and I´m planning to make an asteroid field for Star Wars campaign in far future :) Coffins from Malifaux will make great rubble scenery for Descent and for RPG use. Maxmini Iron Pattern Jump Packs for my Vanguard Marines. They have been out of stock for a long time now... finally I got them. From Gamezone Miniatures I got Goblin Shaman Wolf Rider. It will give some boost for my small Night Gobbo Wolf Rider unit.  That´s all now... Bye!
Posted by Alexander Man at 18:02 1 comment:

I finally found some painty time... so I got to complete these amazingly sculpted Night Goblin Fanatics, which been on my  hobby table for some while now (with many other projects). Here´s the pics. 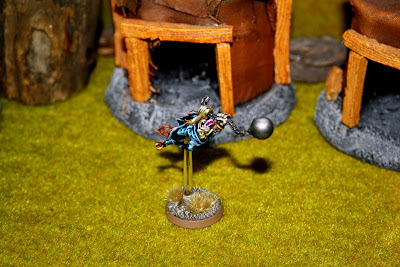 This one´s the Flying Fanatic... The original mini has the ball attached on the base. I cut off the basing lid and filed off the excess metal. After taking a pin from a flyer base, I drilled  a hole on the gobbos back and glued it on... I did it because I really like the minis facial expression, and it would had gone to waste if it looked downwards. 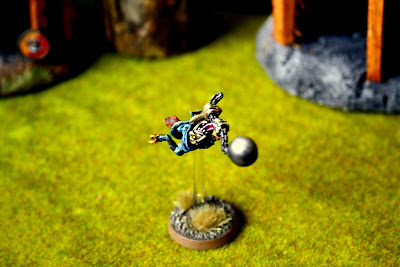 Coming at ya..! Look at that pretty face. 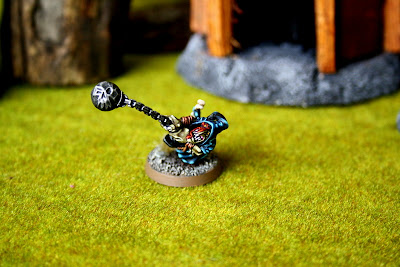 For this loony I decided to give a simple "half red, half green" war paint. I think it works pretty good, and adds the level of devoteness at spinning the ball... under the influence of few mushrooms. 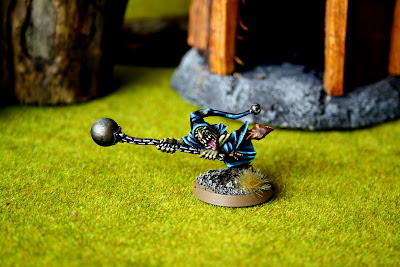 No tricks with this one. Just a basic nutbag... 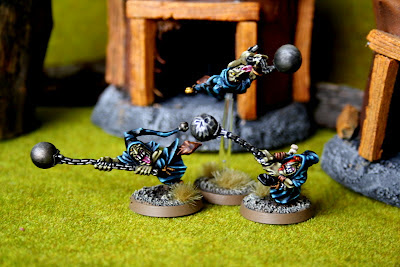 Fast update to what´s going on... Finally I got some time to assembly the Space Marine Assault minis, that I won from Santa Cruz Warhammer give away. My son detached the parts from sprues, and I was the glue master... 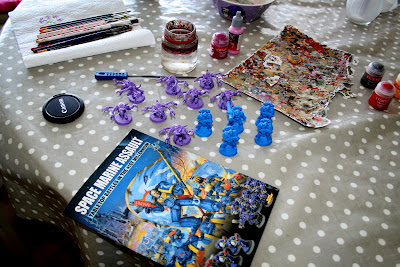 Here´s my son´s first Marine painted... he chose the one with Rocket Launcher of course. Not bad paint job for a six years old, I think! I try to give the Genestealers some fast paint job before we try out the game. 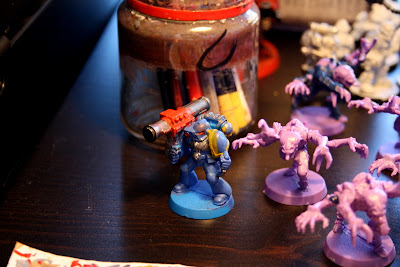 The game rules are really simple, and seems like a great introduction to the hobby for the kids. It´s good to teach them how to blow up some aliens... you´ll never now when you need that tactical eye for it. I´ll post more bout this when we get the project further... It´s been fun so far. Bye now!

No time for hobby :( Snotling Power

I´ve been busy lately with the family, renovateing our apartment, work... and other stuff. So there has been no time for painting at all :( But I have ideas for mini projects bouncing in my head all the time... One the ideas is... Snotling steam wagon. 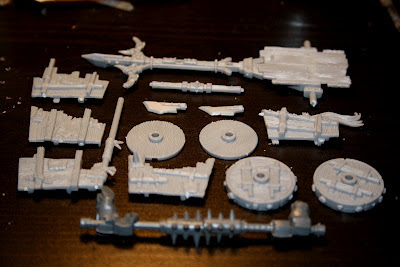 I have just one Snotling Pump Wagon for my Greenskin army so far... and I´m in need of another :) So I dug out one of the Orc Boar Chariots that I haven´t assembled, and started planning a kitbash Pump Wagon... Spiky Roller is coming up from Black Orc bitz as you can see :) 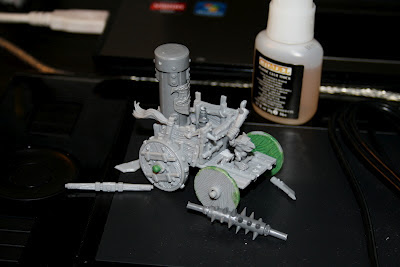 Later I had the Idea to add a "Steam boiler" and some engine bitz on the back of the wagon... Could it be that the genious Snotlings have looted and recycled some parts from one of Leonardo of Miraglianos wonderous Steam Tanks... and made it work... on some level... 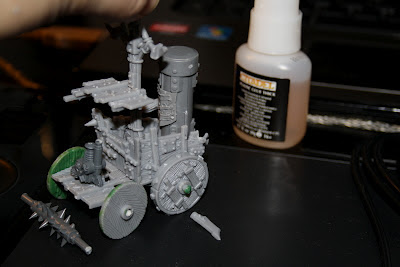 Hmmm... or maybe like this... I re-assemble the bitz every time I pass my hobby table. 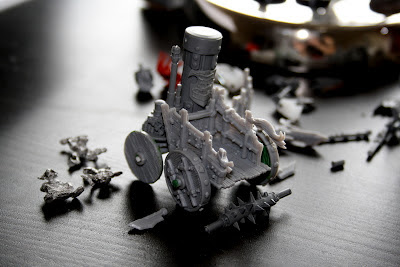 Or could this work... Hmmm... Lot of work there. I try to post something soon regarding this project. And I hope to find some painting time too in the near future :) Bye now..!
Posted by Alexander Man at 22:28 No comments: