Year has passed again! Thanks for your comments and for fellow bloggers inspiring postings and great ideas..! I had a quite busy year in painting field... and I noticed, that I have made my own record this year, painting just over one hundred minis!!! Can´t believe it. Two orders from Pan-Vision sure helped... in form of Dawn of War and Space Marine projects (later project fell down with some THQ corporate employee changes or sumthin...) But I sure got my own projects going on too... WHFB, WH40K, Descent, and some Rune Quest minis too. This blogging stuff has been the fuel for my miniature hobbying. And, once more, you fellow bloggers have been an inspiration to me and given me the enthusiasm to paint, paint, paint... all year :) Thanks for that! Here´s few pics from this years projects! HAPPY NEW YEAR EVERYBODY!!! 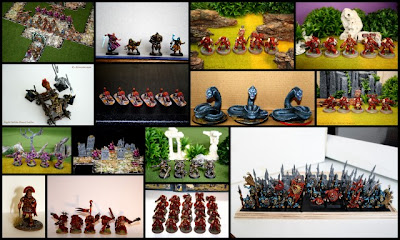 Posted by Alexander Man at 15:44 No comments:

Hello! As I wrote in the earlier postings... I´m trying to pull 1500pts WH40K army together from my miniature cupboard... I counted that have all the minis I need for it, but there´s quite a job to assemble all of the marines to playable form. Now I got my old Dreadnought project back to the table again, and continued to build it for a battle to come. It´s the Dread that came inside the brilliant Assault on Black Reach box. So far I have cutted off the multi-melta and replaced it with home made Autocannon. How I made the Autocannon can be seen here. 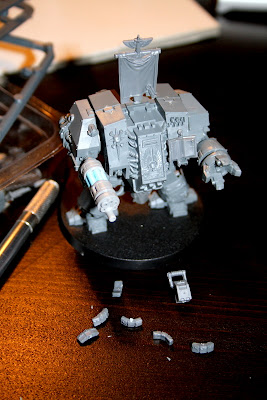 I got some bitz from Tactical Marines box (the gear/ammo belts), and from Assault marines I took the ammo box. 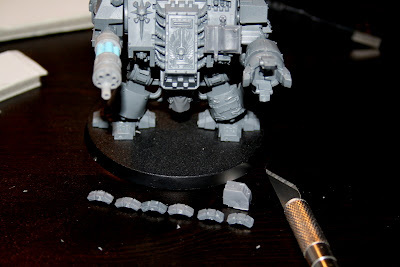 I cutted the rivets and lids off the gear belts and did some shaping on the ammo box. 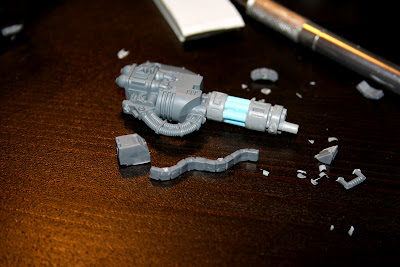 Next I glued the belt  bitz together to a long autocannon ammobelt... 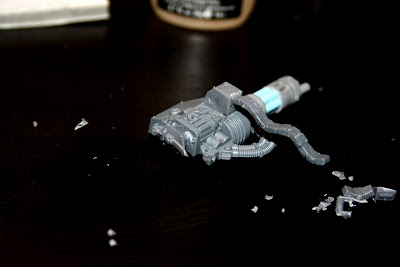 I made an ammunition hopper out of the Assault Marine ammo box, and attached the belt to it. I also cutted of the tank out of multi-melta, and added one armour plate in the back. 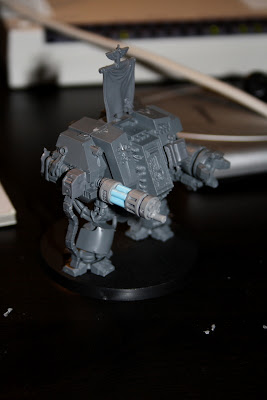 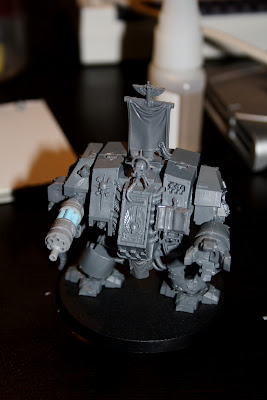 While checking the bitz box for some ideas, I got one Servo Skull in my hand... and tried it on. I think it looked nice... Like the old veteran inside was taking a peek... "Coming out of the sarcophagus." 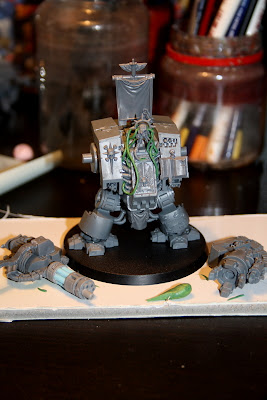 I refined the idea with some green stuff... 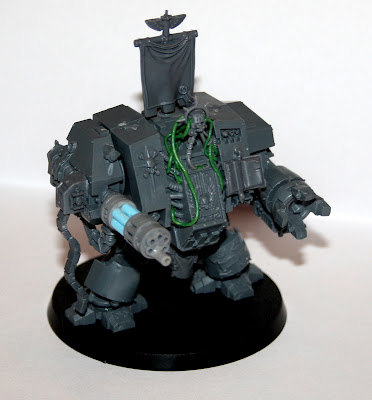 Here´s how it looks like at the moment... I think it came out pretty nice. 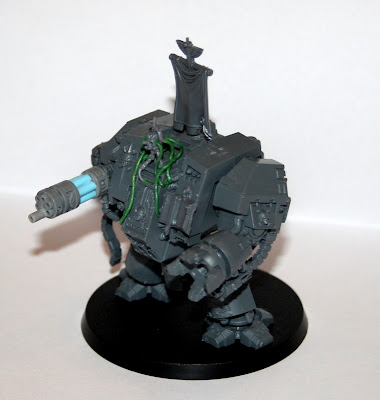 I think I´ll start the painting next... Will be back with this one soon... Bye now!
Posted by Alexander Man at 16:19 No comments:

Hello! Two hobby things from christmas time... First thing is that SC Warhammer give away arrived just before christmas, and it was just great. I had never heard about this "Space Marine Assault" box before I red about it from the SC Warhammer blog...  And suddenly, out of the blue I was the lucky one to win they´re "perfect Starter kit"... that included the Space Marine Assault and lots of extra hobby stuff. 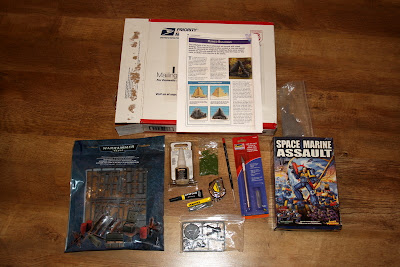 In the box was some flock, basing sand, hobby knife, plastic glue, measure, some scenery for 40K, the Space Marine Assault box, Terminator including rules for Assault game, how to make wargame scenery turorials, paint brush and some super glue... Amazing. And here´s what´s inside the Assault box. Eight Genestealers, five Space Marines, some paints, paint brush, dice and the Game Rules book. After reading the rulebook, I felt that the game seemed very much alike with the Space Hulk or Space Crusade... Meaning very simple rules with fun scenarios. I will try it out with my son. Big thanks for the guys at the Santa Cruz Warhammer!!!

Second thingy is the greatest present of  the Christmas... that I bought for  my six year old son. (My wife says that I bought it for my self... And she´s 75% right) 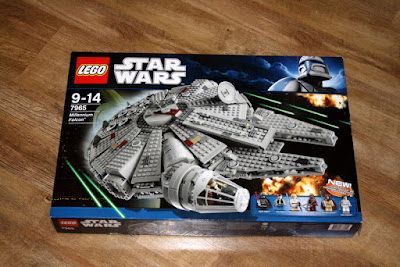 Ladies and Gentleman, The one and only... Millenium Falcon!!!
I was lucky to find it in sale, where all Legos were half price. Other wise I never would have bought it, in full price of 180€. That´s a bit salty price for a toy I think... (unless it has something to do with my miniature hobby :) 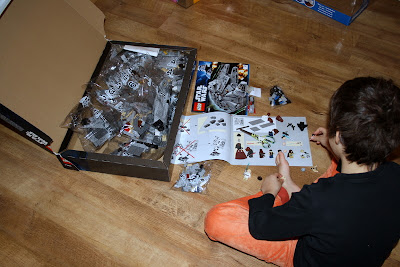 We were abit surprised by the amount of Lego pieces in the box... "Wow Dad..! That´s a alot of lego bitz!" -"That´s right my son... You´re just gonna have to use the Force to assembly it!" 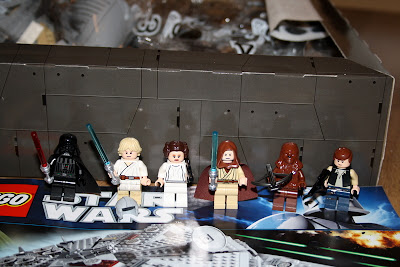 I think the Lego characters in the box were great! No need to introduce them... I guess. 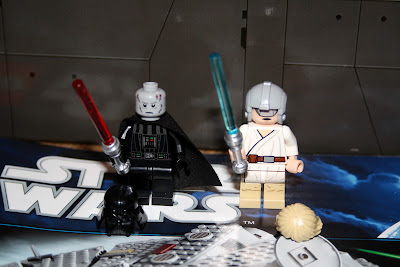 Nice details were the Darth Vaders face without the helmet... And when you flip the head of Luke Skywalker and put on the helmet, you have the Jedi practice theme going on... How cool is that! 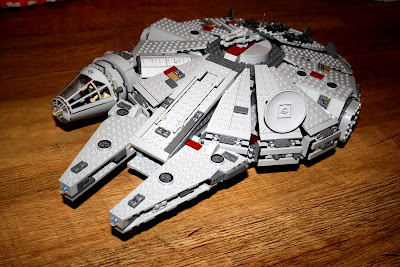 I took lots of WIP pics of the assembly, but I think I just go straight to the finished Millenium Falcon. There you have it... It also has laser turret in the bottom. And you can put Lego dudes sit inside the gun turrets, just like in the movie. Awesome Dude..! 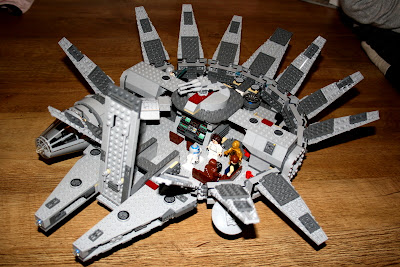 And ofcourse, you can open up the top, so you can get a peek inside the Falcon... There are some guys sitting around the Derijak Game table. "Just let the Wookie win...ok?!" 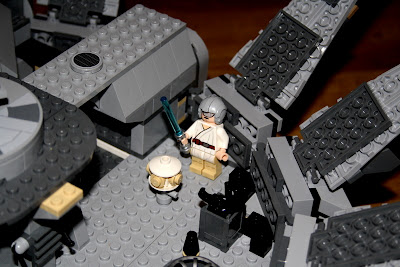 "Use the Force Luke"

Defence of the Gingerbread House: 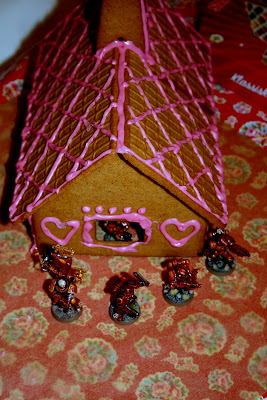 Defender can have unlimited forces of Space Marines.They try to defend the Gingerbread House from hungry kids, who have waited Christmas for three (or more) months now... Kids have Feel no Pain, Furious Charge, Stubborn and Hit and Run special rules. Game lasts for six rounds or ends when the objective has been "destroyed". 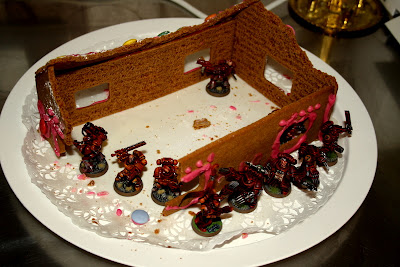 These silent assasins came out quite nicely... Only three of them in the game, so it was pretty fast job :) I tried to paint the Assasins colors as they are in the Descent books. Nice color theme, I think ! 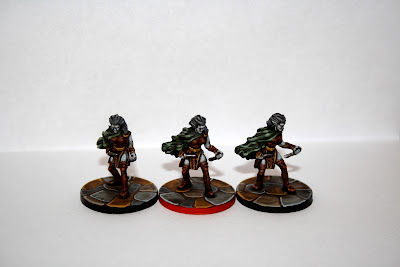 Base colors: Codex Grey to the hair, Astronomican Grey to the skin, cloak with Knarloc Green, and the leather parts with Bestial Brown. I washed with DevMud and highlighted with base colors adding white. There you have it... Bye now!
Posted by Alexander Man at 01:14 No comments:

Serpents of Hellfire: Call to Arms

Old friend came by last week. As we were talking about hobby stuff (40K mostly), it turned out that he had grown he´s Tyranid army up to respectable 1500 points. I also have some Space Marines laying around, but I have never put them together in a proper army form. I like to paint and convert them, and even have my own successor chapter of Dark Angels called "Serpents of Hellfire" (check out the older postings), but it´s been kind of a background project for a long time now. I´ve allways been more of a WHFB player... but maybe this is gonna change now :). We decided to arrange a game for 1500 points armies in a near future, so every now and then I´ll be posting about what I´ve put together for the Marines.

In inspiration of this, I kitbashed together a Vanguard unit from pieces of Dark Angel veterans, Space Marine Tactical Squad, and Space Wolfs... 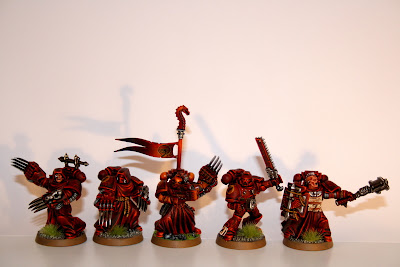 Mini in the middle is very old stuff... It was in the "Chapter Master" competition early 2000(ish)... And after that I´ve  painted my Marines and Terminators with almost the same manner. Now I took a whole new angle to the painting. First of all, I left the dry brushing off. I painted a very dark under coat and made high lighting pretty stong... to the level of blazing orange. Finally I added some flame patterns to the minis armours and cloaks. First I was afraid to make them look like Hot Rod cars... but I think that didn´t happen here :D I´m happy with the new "Hellfires", and they were pretty fast to paint this way.
Here´s a pic of what I got together so far from my mini cupboard... Still lots of stuff in there to glue together :) 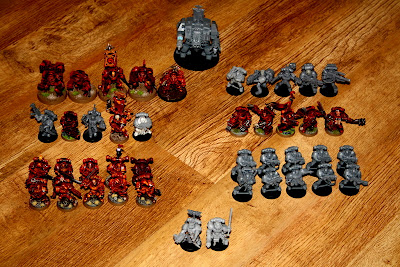 Some of the HQ personnel, two tactical squads of ten, 5 Vanguards, 5 Sternguards, 5Terminators (gonna skip the Cyclone I think), 5 Devastators and the Dread... I hope Santa´s gonna get me some heavy support in form of vehicles... And bikers would be nice :) Bye for now!
Posted by Alexander Man at 00:54 2 comments: