Hi there! Long time since the last posting... and still no miniature painting time. Nice to see anyways, that I haven´t lost any readers :) Only thing I´ve been painting lately is the walls of our new apartment. Were almost done, just the livingroom left for painting, and that´s it.  :)

But the Campaign goes on, and I managed to find time to play my first battle, that was against the Wood Elves. Ormgod da 'Orrible was victorious!

High lights of the game for me must have been Giant jumping on a unit of ten Wardancers, splattening them in one round... and Ormgod´s boarboyz destroying two enemy units and running enemy liutenant off the battlefield :) My four Spearchuckas had their aim right whole game, and I´m sure to have them in my next armylist too! 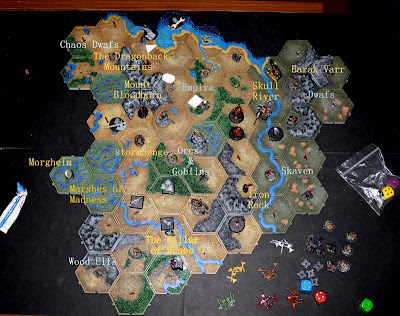 The campaign turn was eventful also... Dwarfs of Barak Varr got the plague on them, losing a fortress. Chaos Dwarfs and myself got spies, so we get to see enemy forces before next battle. Skaven found reinforcements from their endless caves and tunnels, so they have extra banner for the rest of the spring season. Wood Elfs got into furious rage and now hates everybody :o In the courts of Empire there was infiltrators present... (Pick opponent, and pick who they challenge this turn).

For me, the movement phase of the armies was pretty chaotic. I tried to expand my borders ofcourse, but had no master plan for my banners... Maybe it´s because my empire is in the middle of the map, so the pressure comes from every direction :) 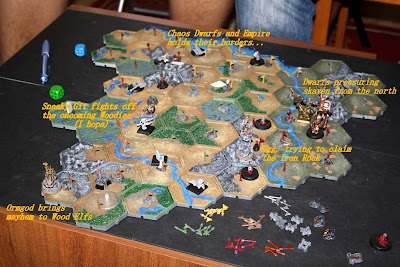 Ugg of da Wyvern Cliff´s took he´s army to the Skaven county, planning to conquer the Iron Rock (for the filthy rats broke our alliance). Ormgod da 'Orrible galloped across the Wood Elf land just to bring mayhem and disorder... and ofcourse to claim the land for Greenskins. Sneaky Git of Eight Peaks stayed inside the borders  of the Orc Empire to defend it from oncoming Woodies! So... I have two battles coming before next campaign turn. One against angry Wood Elves, and the other against filthy double crossing Ratmen... 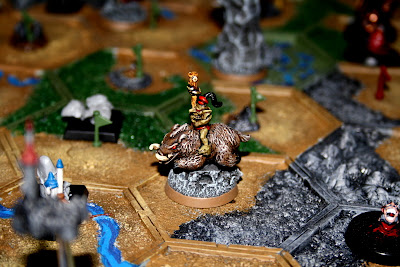 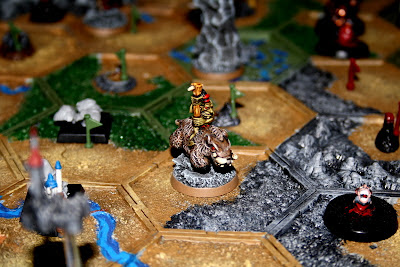 Posted by Alexander Man at 15:58 No comments: