Hello! Got my painting table cleaned up after the renovating the apartment... It was full of weird stuff that doesn´t  belong there. But now, after a long time, I finally got to paint something in a decent enviroment... It sure beats a sticky kitchen table!

Anyway... I got my hands on some Descent miniatures for a change, for we are gonna (hopefully) have a Descent "Road to Legend" session in a near future after a really long break. Well, here´s some pics... 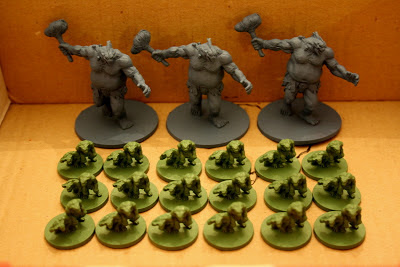 I spray painted the Trolls with Army Painters "Wolf Grey", and the Kobolds with "Goblin Green".

Painted the cloth with Tausept Ochre, then washed whole mini with Devlan Mud...

Theres a first group of five ready. Fast high lights with Goblin Green, then another layer with adding little white to the previous... Eyes with little dots of Golden Yellow.

This picture is just for scale. The litlle buggers are really small... and I think the sculpting on these minis is just great! They paint up really nice considering the size. 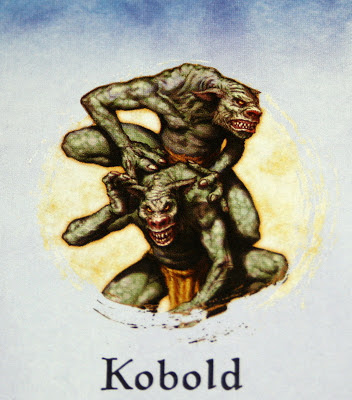 Here´s artist´s vision of Descent Kobols from the rulebook... So that´s where I was aiming at with the color theme :) I´m quite happy! More to come... Bye now!

Finally got some results, after enough googling :) Minis in my previous post seems to be Old Citadel 1988 Adeptus Mechanicus Miniatures... Here´s a link to more info and some amazing minis! Enjoy...
Posted by Alexander Man at 17:21 No comments:

Hello! I got a Techmarine and some Servitors from my friend a while ago... I tried to find some info about the Techmarine miniature from the internet, for I had never seen it before. Doesn´t mean it´s rare or anything, for I´ve hardly seen a fraction of the GW minis in my hobby time... But it was kind a weird that there was so little to be found about it. 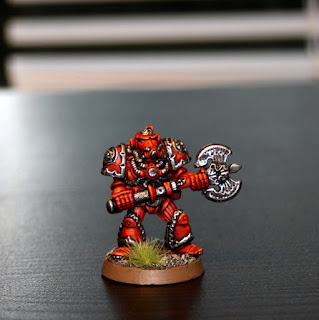 It was really fun to paint. The sculpting was little rough at some details, but it painted up really nicely! So if you 40K veterans got some info about the mini... like the "edition" it belongs to, sculptor, or some links, I would be happy to be a wiser man :) 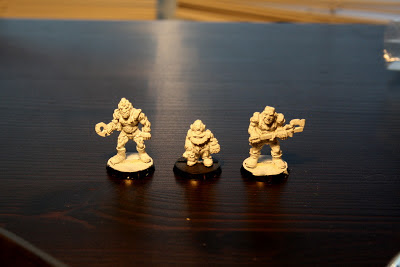 Here´s the servitors... That´s a Squat in the middle. How cool is that :D I hope I find some time to paint these soon. Bye now!
Posted by Alexander Man at 18:57 No comments:

Hello! Finally our apartment is ready... All rooms painted! Well, there´s still lots to do ... Moving furnitures and just general cleanup after renovateing. But I found some time to slap paint on two minis that´s been waiting for color in my cupboard. These are "Wargames Factory" and "Warlord Games" range minis that I´m going to use in my old Rune Quest RPG... I´m thinking of moving to "Rune Quest 6th edition" or brilliantly simple "Open Quest" system. But more of that later, here´s few pics. 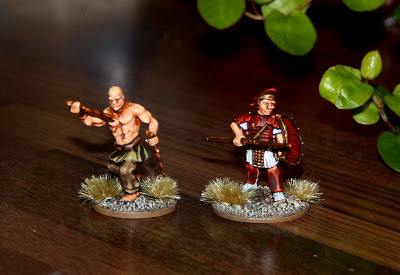 Humakt initiate and  Lunar Red Champion. The Humakti is still missing details, protective tattoos and final touch, but I think the Lunar is ready for service... of the Red Goddess. 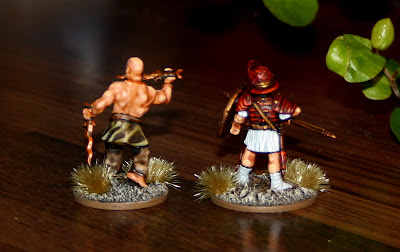 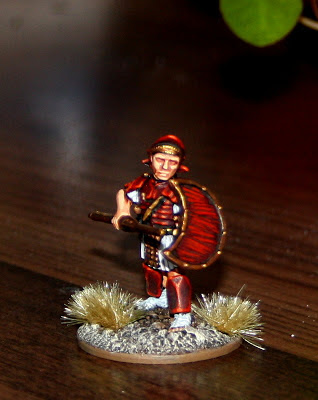 I like that moon shaped shield... Suits the lunar theme :) 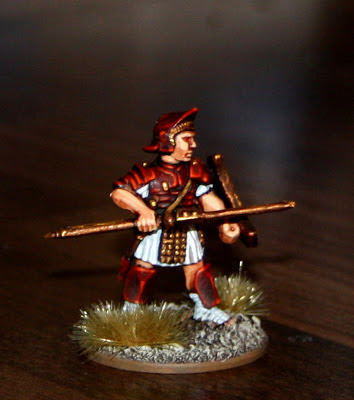 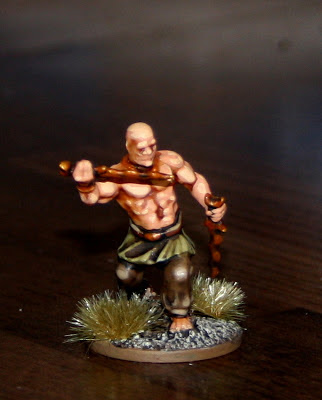 As you can see... colors were really slapped on with this one. But I like the result so far. And with some details it will be "ok standard" for a big battle. 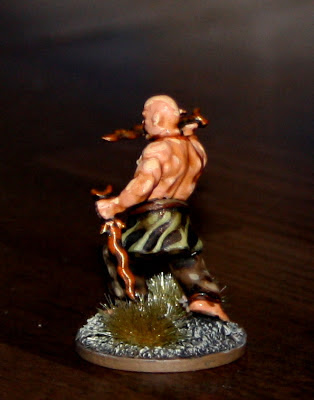 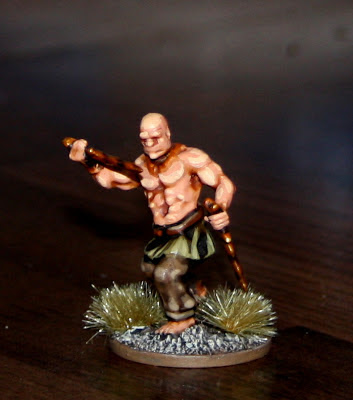 Just a quick peek to the campaign game we had over a week ago... It was my Ugg of Da Wyvern Cliffs and he´s orcs... against Morgear, the Skaven Warlord and he´s squeeky horde of smelly rats. 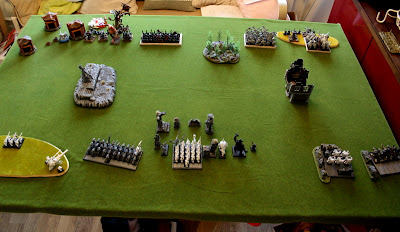 In the campaign we´re actually allies at the moment... but as I was "just passing through" Skaven lands, the rats misunderstood my intentions as I "took a rest" with my banner at the Iron Rock. Morgear somehow feared that I was trying to claim it for my own benefit... what a paranoid rat. I would never... 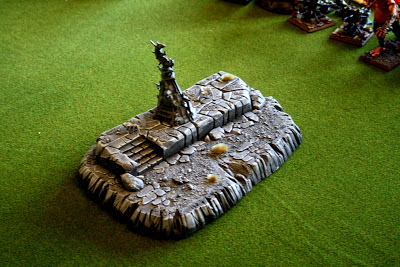 So we marched to war. I had pretty much the upper hand, for I had Spies (I got to see opponents armylist before battle), and +300pts that I had hired to my banner, with the silver I got from my mines. 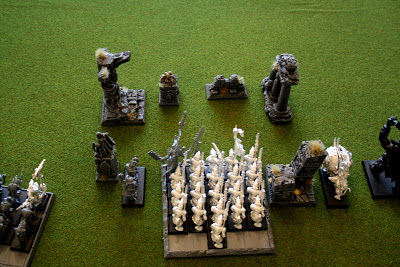 After deployment, I got to realize that my spies and +300pts wasn´t going to win the game for me. Warplightning Cannon blew up six of my Savage Orc Boar Boyz... and kept going with it in the turns to come, shredding my Spear Chucka´s and Pump Wagons to pieces. I was really waiting for that missfire... that never came. 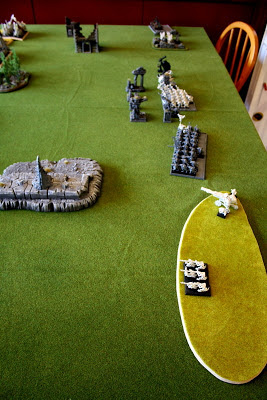 Skaven Battle Standard Bearer with he´s rats made pulp of my Night gobbo horde, even as they had to charge through whirling Fanatics...
And Skavens had allies (because of the Iron Rock). A Giant, Wolf Riders, a Night Goblin Shaman... and the Dice Gods, who all played important part of making my army smaller... and smaller. 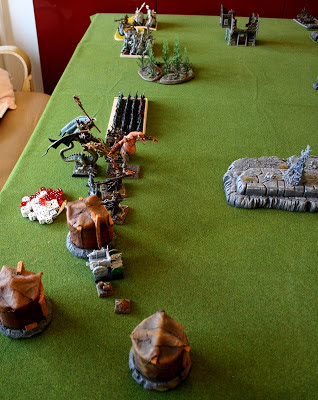 Well, the orcs had few good moments too. Fanatics and Pump Wagons really worked this time... The boar boyz managed to destroy few unit, even as they lost most of the riders for warplightning at turn one... Giant picked up the Skaven army general Morgear, and threw him back in the battle, splattening the rat for good. (We´ll see if Morgear never fights again, after next campaign round). 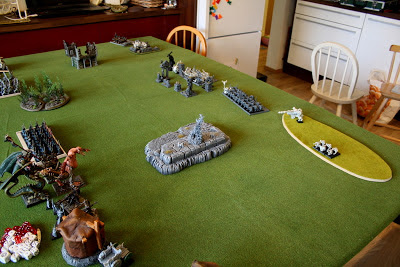 My disappointment was actually my army general Ugg of da Wyvern Cliffs, and he´s trusty wyvern "Baity"... They were hiding from the Warplightning for the first three rounds, and in their first charge they made six hits... and zero wounds, as I threw five one´s and a two. The Dice Gods... And as I got depressed from the result, I forgot to throw the thunder stomp too :) 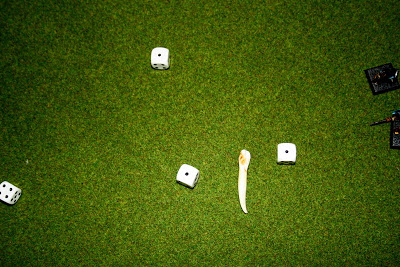 Example of how you throw "to wound" dice, when it really matters... That´s my  Lucky Wyvern tooth in the middle, that I throw with the dice...somehow it doesn´t work all the time :o 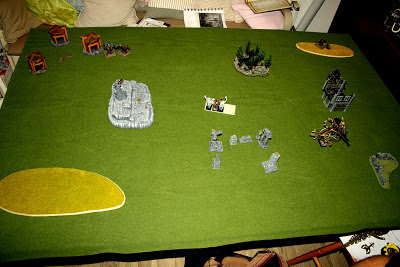 Here´s what´s left after the turn six. Orcs: Three boar boyz, Ugg and Baity, three spear chucka´s. Skavens: A giant... the big black mini hiding in the woods.  The game was all about huge carnage and dramatic turn of events. In the beginning of turn six it was still uncertain who´s gonna win... or if we were gonna draw the game. In short, it was a perfect game of Warhammer... And it was another victory for the greenskins! Waaagh!

Posted by Alexander Man at 10:33 No comments:

Warhammer Scenery with a carpet knife...

Hello! We had another game of Blood in the Badlands the other day at our place (more of that shortly). At the moment I´m kind of a short of scenery pieces. So I decided to come up with something new... quite fast. I dug out few blocks of poly-urethane, and my trusty old carpet knife, and started to carve. 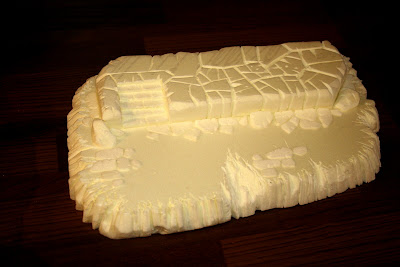 Here´s what I did first... I cutted the basic forms to the upper and lower pieces. Glued them together with PUR-glue. Then I  hacked the edges of the lower hill with a regular carpenters knife... kind of using it like an axe :) Wery good therapy... if you remember to watch your fingers.

Then I carved the upper level stone patterns and stairs. I added little bits of smaller rocks to the lower part to give it some texture. This was all surprisingly fast and fun to do... 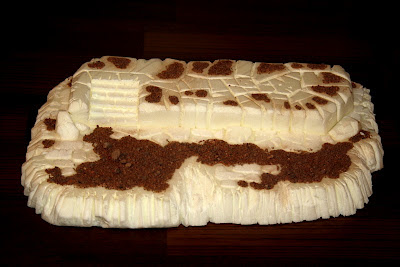 And then some sand here and there... 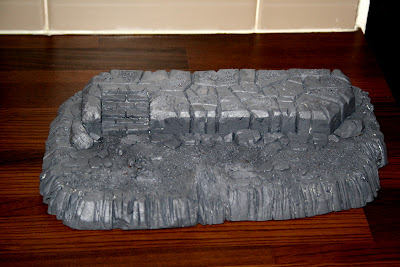 I mixed a grey color from my acrylics and gave the hill first coat of paint. 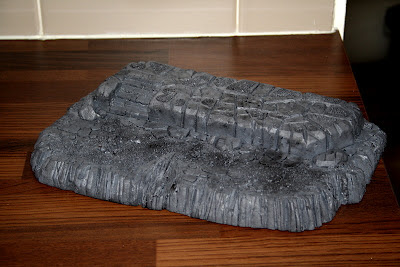 Little bit of watered down black to make some shadows... 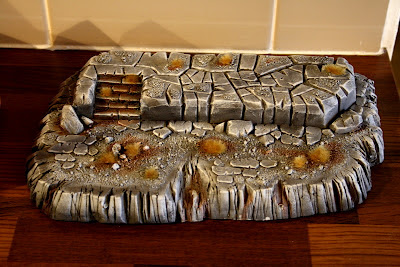 And here´s quite a jump with the pics... sorry bout that. But what I´ve done here is I Dry Brushed the stone color with basically adding white to the original mix... Doing three rounds always with some more white. Final High Light I made with a small brush, painting just some edges of the stones. Then I used Ogryn Flesh on some spots to give the scenery some earth color... After drying up, I glued some turf on the middle of the washed areas. And that´s it!

I´m quite happy with it... It is easy to change the theme of the hill with some small bits. Like we did in the game, putting a Idol of Gork on it. And here´s some other shots, with the scenery bits you´ve seen before... 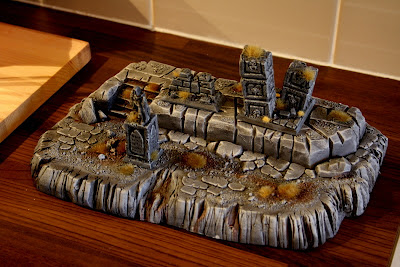 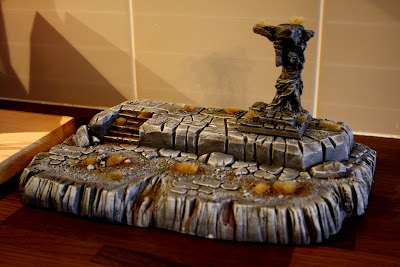 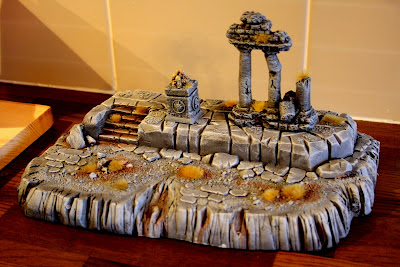