Here´s the third one of the black orcs... The Standard Bearer. 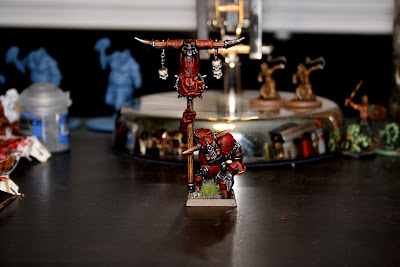 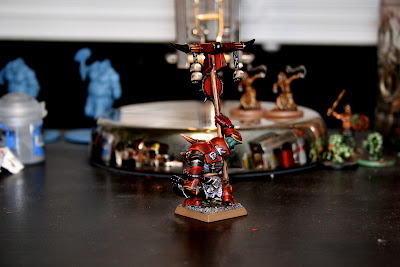 This was also painted pretty fast... I´d like to get something ready for the Blood In The Bad Lands campaign´s next season, rather than use hours for some details that no one will notice from the ranks of Orcs... Had to give some time for the standard and horns, but the rest of the mini was just base colors, heavy washes, and simple line high lights. 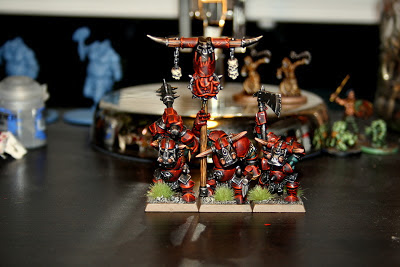 The first black orc was so much fun to paint, that I had to paint another, and put other projects aside... :) 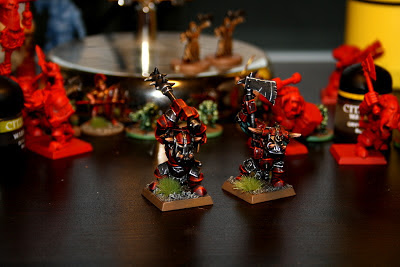 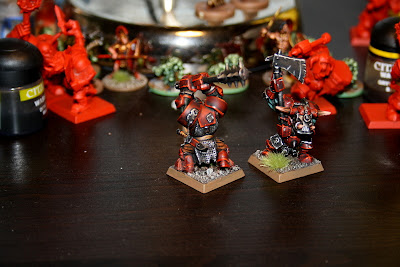 Hello! I´ve ran a little short of painty time recently, but got little something done anyways :) For a long time I´ve been eager to get my Fantasy Battle Black Orcs on the painting table... (got horde of them) and now I finally painted my first one. It was more of an experiment, planning the color palette of the unit. I´ve allways liked the red color theme on the Black Orcs armour, so I gave it a try... 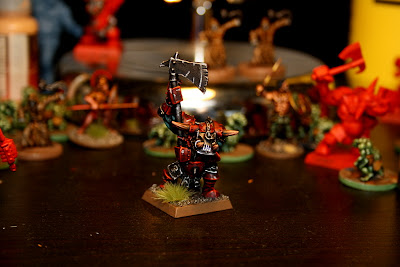 I primed a punch of Blackies with red, and painted this one pretty fast to a "rank 'n file standard"... Details are rough and wash is heavy, but I kinda like the general result... I didn´t want to go to the details too deeply, but I gave some extra minutes with the horns and chipping. Painting a whole unit in this standard is not gonna take ages, if I get around to it... First I have to finnish the Descent Kobolds base project anyway :)
Posted by Alexander Man at 00:27 No comments:

The Stuff of Legends

I accidentally ran in to this site (The Stuff of legends)... and wanted to share the fun! Might be old news for you, but I got really excited when I found this place. There´s loads of pics of old miniatures  from different manufacturers, and most of them mention the sculptor too... Lots of old mysteries solved :D Like the old Snotling Pump Wagon (one of my favourite minis) was actually called Snotling Attack Cart and was designed by Kev Adams... and the Old Citadel catalogues brought up the tears of nostalgia to old hobbyists eyes. Now I need to hunt few of those old minis down. E-bay, here I come...

Klick the links above and enjoy... Bye now!
Posted by Alexander Man at 17:46 2 comments:

Helloo..! Just a quick update on the Kobolds. Started the dungeon floor tile base project... 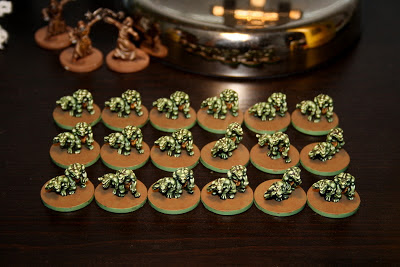 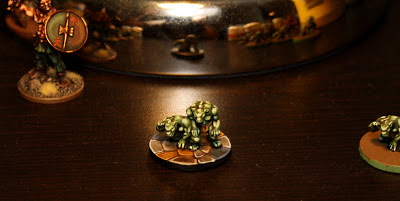 And... jumped ahead little bit here. This is the first finished one. But what I did was paint the stones with four different colors: Commado Khaki, Astronomican Gray, Tausept Ochre and Shadow gray. Then wash with Devlan Mud, and finally highlights with original colors to the edges of the stones... Edge of the base was painted black. Dungeon base is actually pretty fast to do... after you´ve done it few times. I´ll still be back with these, when I get the other fifteen done. Bye now!
Posted by Alexander Man at 18:14 No comments:

Kobolds are ready... It´s on with the bases now. A lot of dungeon floor tiles to paint :o I hope it´s not gonna take ages. 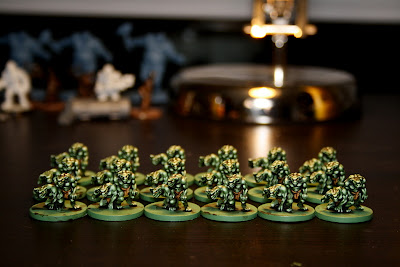 I decided to make another highlight with Goblin Green adding some white to the previous mix... Just little dots on the highest details. It really made a difference I think (and hope). 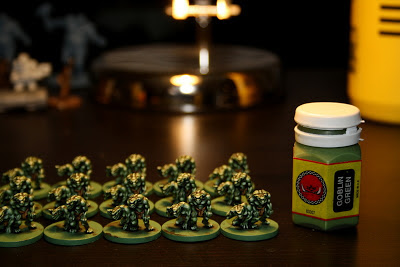 I had to take a picture of my really old Goblin Green too. It still works as if I bought it yesterday. I think it´s from late 90's or something... The paint has not dryed or got sticky. Later days Citadel paint pots were/are not the same. Havent bought any of the Citadels "new range" paints, but I assume they still dry up in a month... use it or not. :( 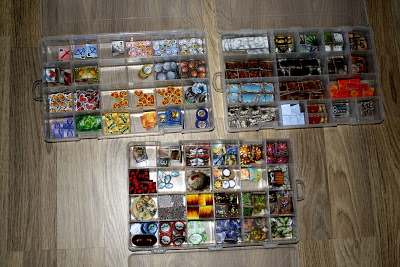 My wife found a really handy set of spoonbait boxes... Three Euros a piece from a local hardware store. Not a bad price I think. Finally I got some order to the hundreads of Descent tokens. Now they are easy to store and carry with me to the game session... and I believe It´s gonna speed up the game alot, not having to dive in a cardboard box full of tokens for a half an hour, and try to find that one "Hero Party Marker" to the Campaign Map, as happened last time. 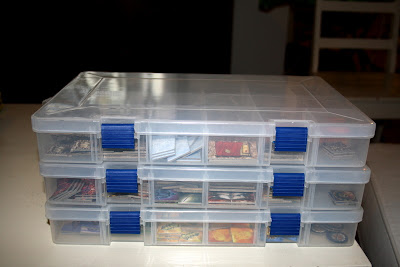 And they stack up real nicely in small space. Allways inportant feature in miniature hobbyist´s apartment... says my Wife...

Posted by Alexander Man at 17:35 No comments: