Hello! Painted this dude yesterday. It's a good support for my new Tactical Squad. Three more Marines to paint, to get the whole squad done... 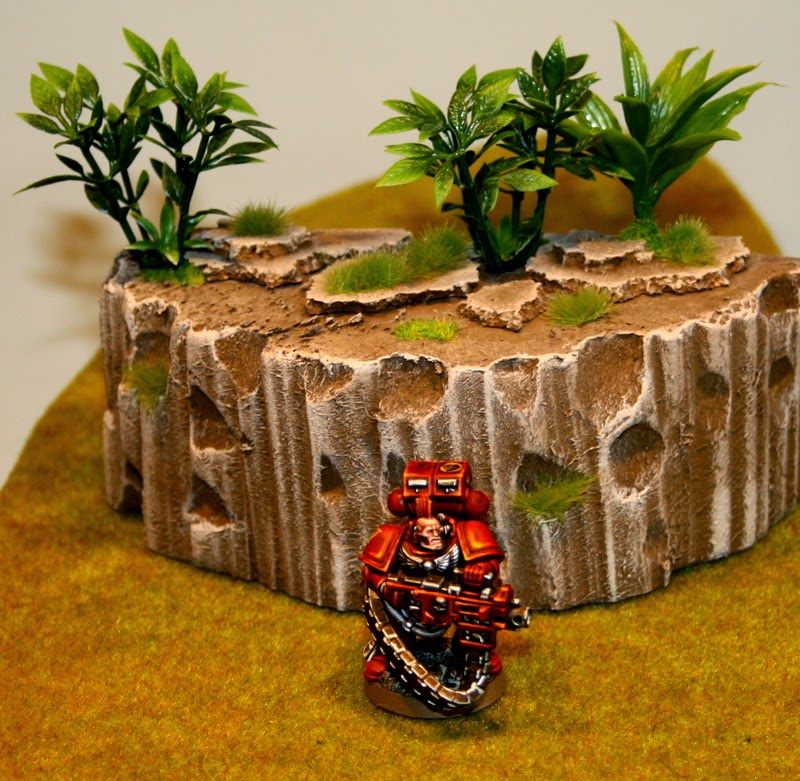 The head is taken from Space Wolves tactical box, otherwise it's all Serpents of Hellfire :) 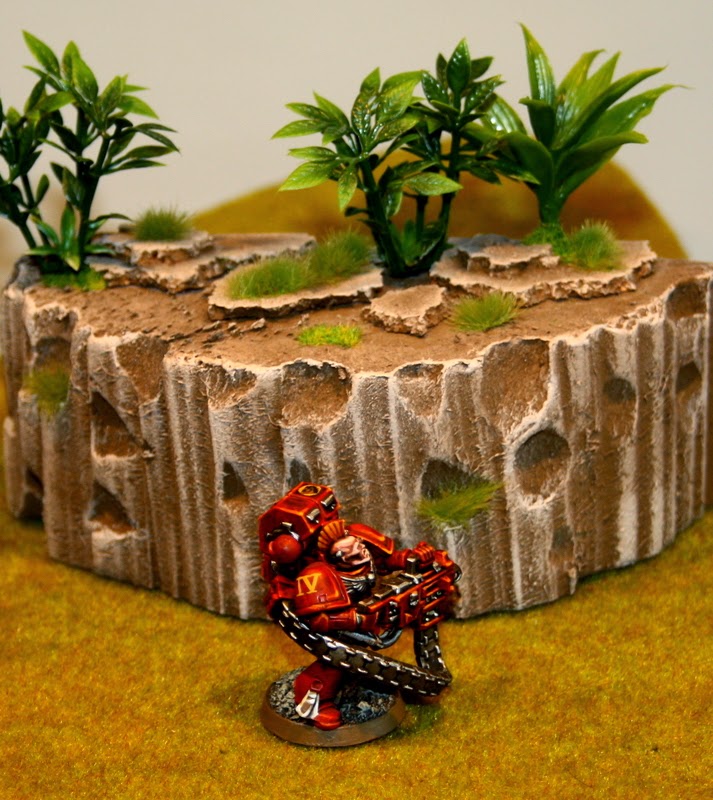 Mohican hairdo was a must have! Couldn't resist to use it. And combined with Heavy Bolter, this Marine is just über cool :) 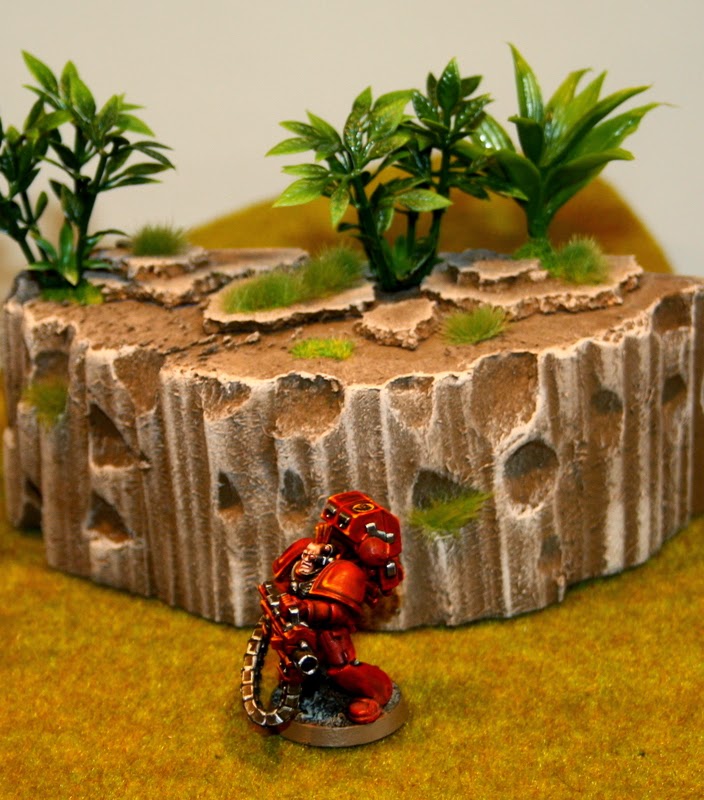 Hi there! I've taken a break from painting Orc's and Goblins, and dusted my old High Elf minis from the cupboard. I've been reading my old 1993 High Elves armybook and got carried away with the bright and beautiful HE color themes they show in the book.
Mike McVey's Prince Tyrion mounted on Malhandir and some pics of the old Dragon Princes of Caledor got me an idea, to create a similar color theme on one of my Spearmen. Here's how it turned out. 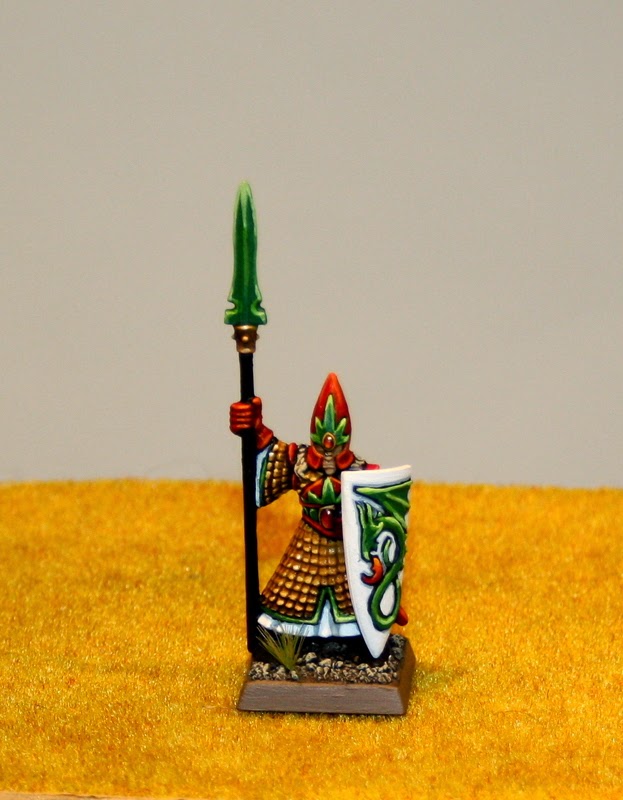 For the first time I did'nt use any metallic colors. Golden armour is simply made with Averland Sunset and wash. Then picked up some high lights with same color adding white. I used green on the spear tip, instead of using traditional metal color. That is also idea I got from old Dragon Princes. 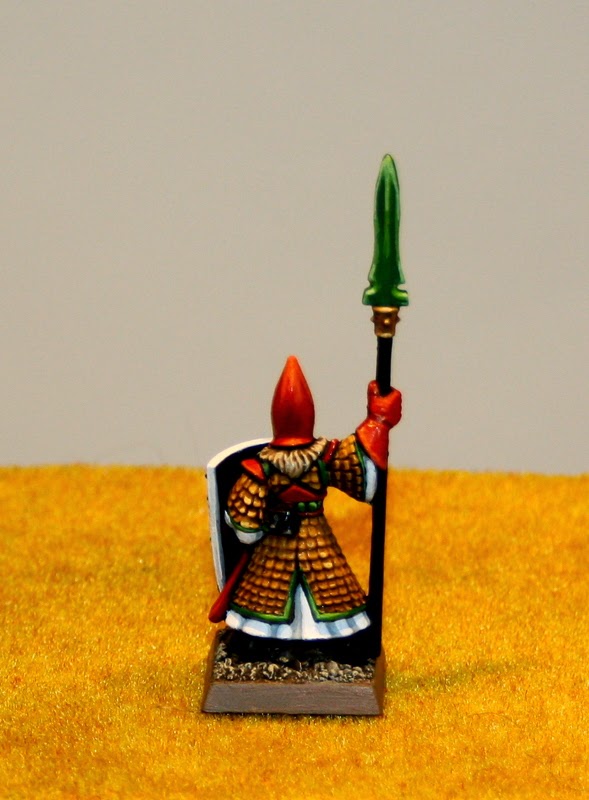 Back side is not finished yet. Missing some high lights and painting of the pouch. 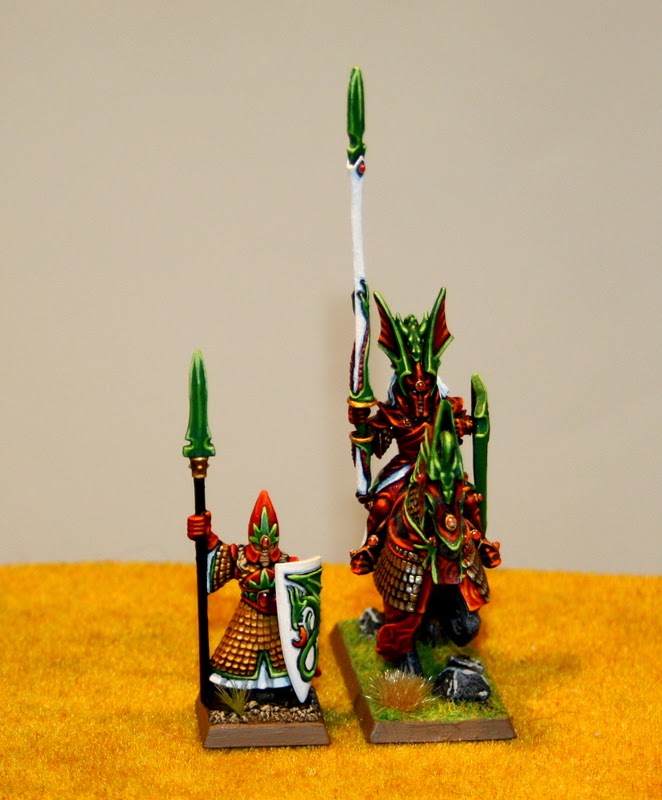 Here's the Spearman posing with my "old schooled" Dragon Prince. I'm now planning to paint all my Citizen Militia ( Spearmen and Archers ) in bright colors of Caledor. Rest of the army would be cool to have some mid 90's themes too. Or maybe I'll create a private army of some Caledorian Prince, so I can use the same color theme in all units :) We'll see... 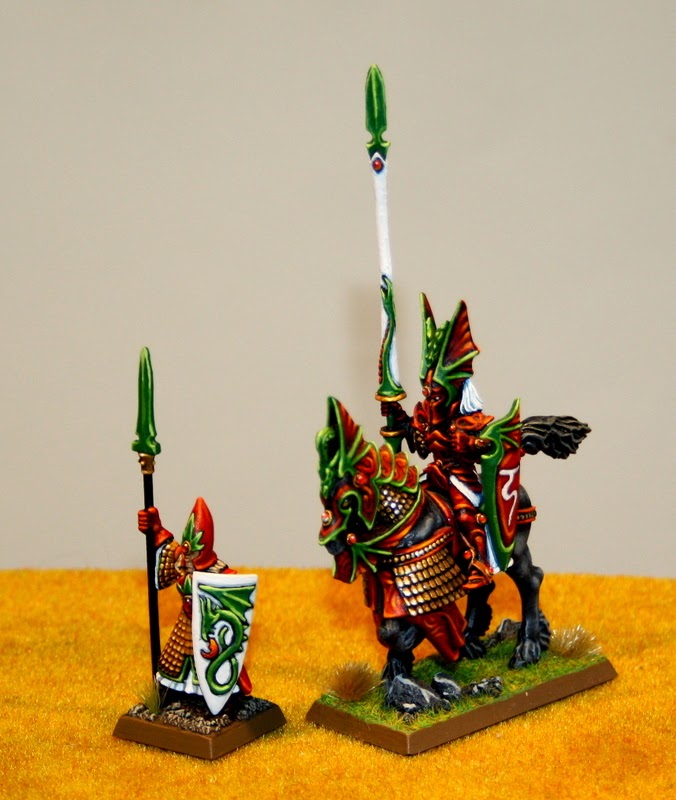 Taken from High Elves armybook from 1997: Caledor is a sparsley populated, rugged, volcanic region which has been home to Dragons since ancient times. The folk of Caledor favour hot fiery colours for their plumes and decorative motifs, and they are the only Elves who commonly use black for plumes and crests... More Caledorians later. Bye now!
Posted by Alexander Man at 23:45 4 comments:

Second rank painted up nicely. These are lovely models. They look very detailed, but are easy to paint. Good combination if you ask me... Here's the pics. 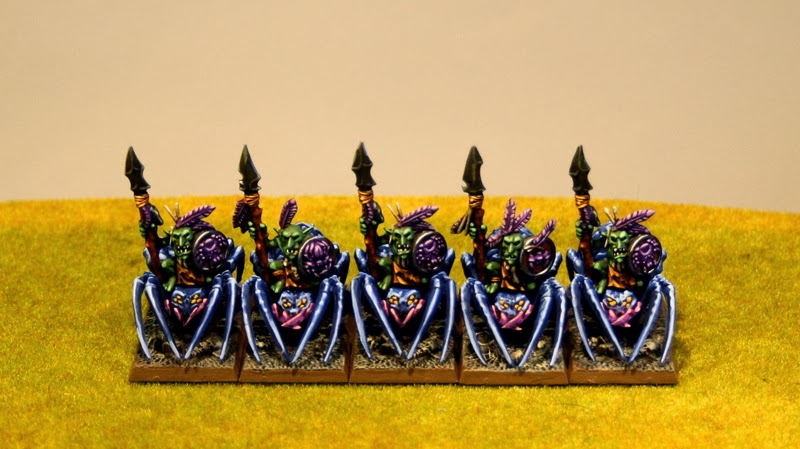 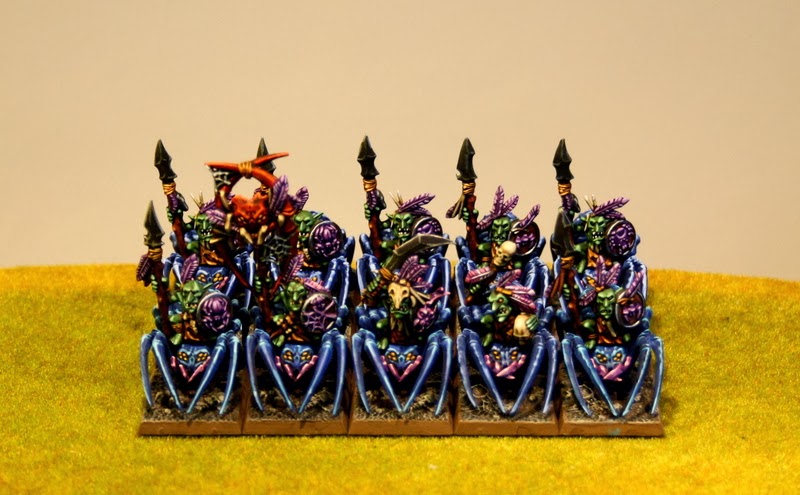 Group shot of the two first ranks. These models also rank up very nicely, considering the eight legs on every spider... 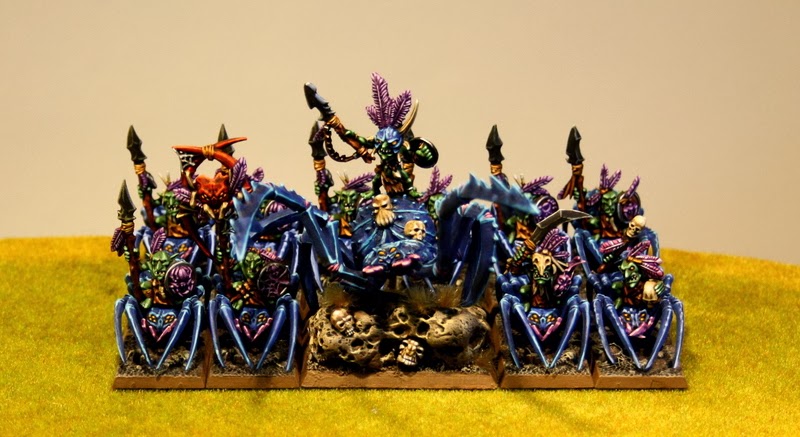 Now I can widen the rank to six models, and put in a Hero with Gigantic Spider! How cool is that!? 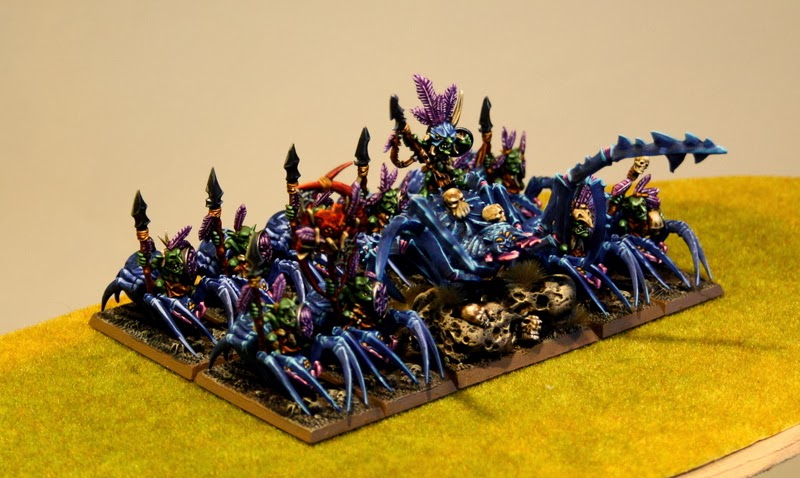 The answer is "Very cool indeed"! For now the unit causes fear too... And if you make the Hero your BSB, and give him the "Spider Banner"... The unit makes auto wounds with spiders on 5 and 6 to hit rolls. And the riders auto wound with sixes. 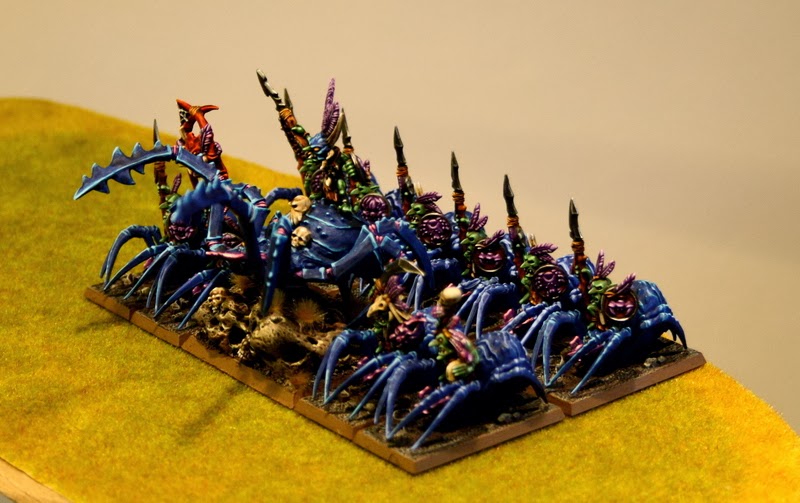 Two more ranks to paint... Hopefully I get to paint them soon. Bye now!
Posted by Alexander Man at 17:32 2 comments:

Big game coming as our Blood in the Badlands summer campaign turn comes to an end. Well... one more map round, and then all the armies clashes at the Marshes of Madness. Big game allways inspires me to paint up some minis. This time I decided to get my Spider Riders back on painting table. I hope I get the whole unit done before the Summer Scenario. 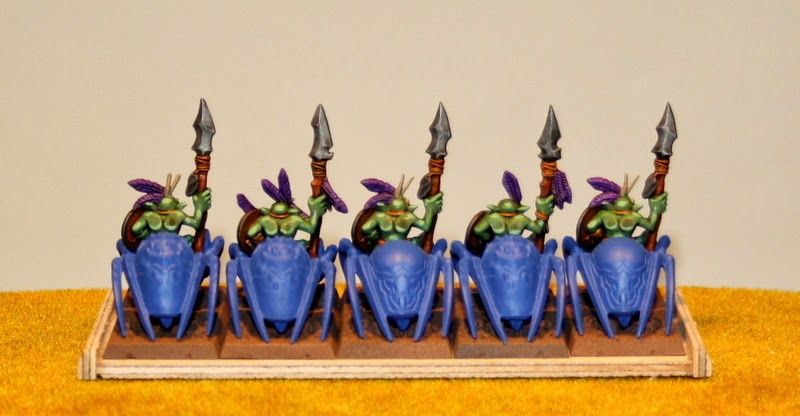 Here's the second rank coming up. Washes and few high lights done on the goblins. Spiders only have the base color. Two ranks after these to come. Bye now!
Posted by Alexander Man at 18:26 2 comments: