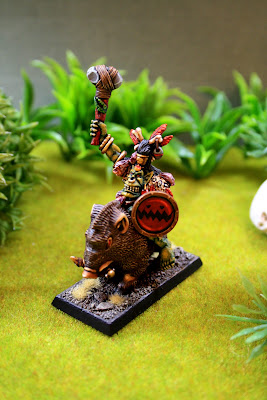 I managed to get my hands on ten oldies Savage Orc Boar Boyz... with a nice price :)  Correction... Two of them are plain Boar Boyz, and two are "SOBB" Shamans. So there´s gonna be some convershu´n clinic mayhem before I get the unit of ten ready. Shamans can be quite easily transferred to boyz, but the Boar Boyz need some cutting and green stuff to become savage... 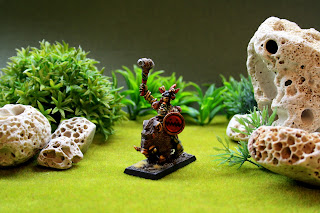 I started painting this mini as a fast paint project... but soon realized that it was full of beautiful details that I had to give some attention. 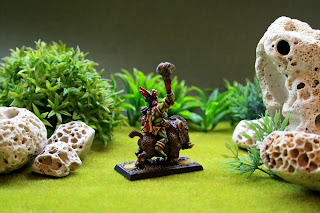 The Orc skin tone is painted with four different layers of green, from dark to lighter tone...(always leaving the previous layer to show a bit from the edges) First a base coat of Orchide Shade, then other layer with Knarloc Green, third with Gretchin Green, and last layer with Gretchin and some Vallejo 332 yellow added to it. I like the result. It makes the Orc skin a bit yellowish, as they used to be at the 90´s :) 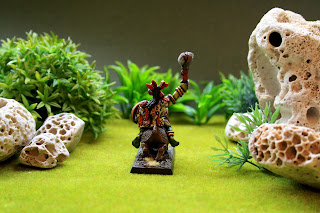 I just had to paint skin on the boss, for I´ve seen it done in some old White Dwarf (or somewhere), and it really made an exotic touch for the Orc. I also decided to paint the bracelet´s golden and few gems for the chief to make him look filthy rich... as he had some higher status in the gang :)
The symbol on is not a Halloween pumpkin. It´s supposed to represent boars snout and jaws... but I screwed it up! :D

Oh... and the cool stones on the background are just stones... that I collected from the beach last summer, when we went to Greek. 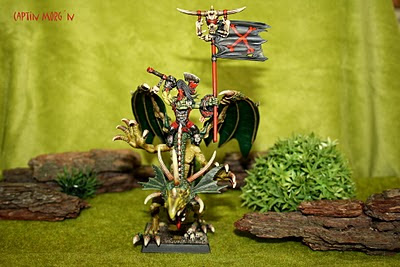 Finally... I had inspiration and energy to attach the banner to dear capitains gentle hand... and paint it. The paint job on the banner was pretty fast. (One night project to attach and paint)... I wanted to keep the banners "art" really simple... (as an Orc artist would :) But still it had to have the Piraty feeling on it, without the usual boring skull theme. So I decided to leave the good old skull away, and use simply the crossed bones. 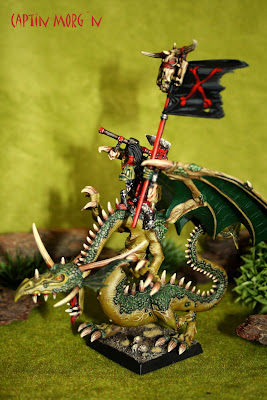 I like the paint job on the banner, but still have second thoughts about the symbol... Is it piraty enough..?! 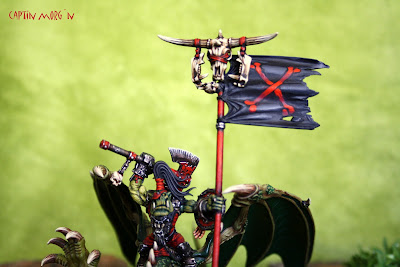 All together... I´m very happy about overall result. It was my biggest single miniproject ever... The Orc is totally kit bashed. Axe-hand from Black Orcs, banner hand from Arrer boyz, torso and legs from Orc Champ, head from 40K Orc... And the "Wyvern" is actually a Dragon taken from Malekith, the Witch King of Naggaroth box. 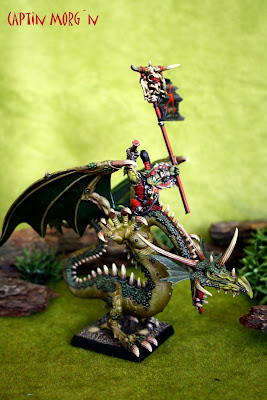 So after all that cutting, gluing, green stuffing and painting, I´m very relieved to get it off my hands :) Now I´m just waiting to see Capitain in action... on the battle field. And hoping he´s not gonna get a cannon ball on his head in the first round of the game. 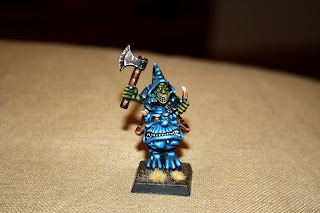 I managed to get five of these old Squig Hoppers in my hands with a fair price of two euros per mini... Here´s first of them painted. It was pure fun to paint... and didn´t take more than two hours to finish :) I sure have the new hoppers too, but I have a "thing" for these old ones... I can´t quite put my finger on it. Maybe the sculpting on these is just nasty as a Gobbo can be.