Hi! Beastmen are ready to defend the dungeons :) Got the basings ready, and here are the pics... 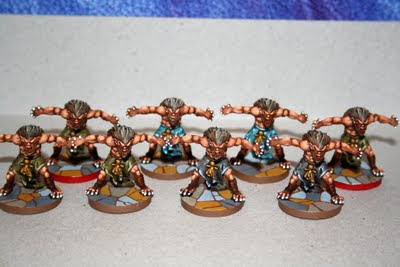 Here are the bases with the first coat of dungeon floor painted. I used four colors to paint the stones: Codex Gray, Astronomican Gray, Tausept Ochre and Kommando Khaki. I used Graveyard Earth to paint some fractures and crackings to the stones. 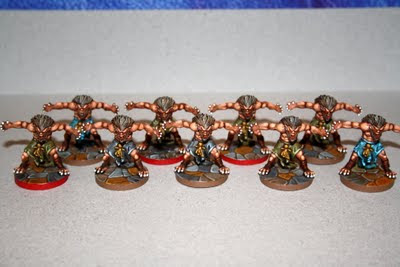 Then I washed the bases very lightly with Devlan Mud. And finally I high lighted the edges of the stones with the original colors, to give them more realistic look... 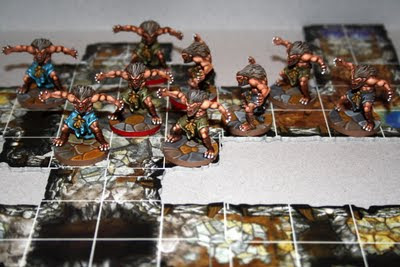 They look pretty nice on the floor tiles... I still wonder if I should have painted the stone pattern to the edges of the base also... Except to the red bases of course. Well maybe later :)
I have already started with the Descent Skeletons. I cleaned them up and gave them a bath in fairy water... (I believe the paint will stick better after that) And I also primed them with the same Army painter Brown as the Beasties. I´ll post some WIP-pics as soon as I get some real colors on them :) Bye now!

Hello! The Descent Beastmen are allmost ready... Just missing the basing. I tried to keep the painting job really fast, but neat... I don´t have much experience in fast painting, but I´m pretty happy with these Beastie Boys :) I also took few WIP-pics this time. And here they are... 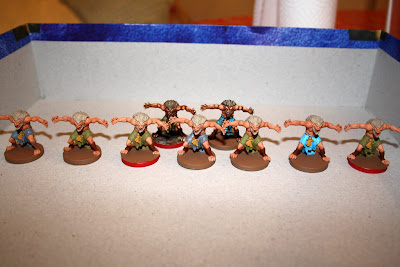 Here they are with the base colors. I tried different colors with the clothing... otherwise they all have the same palette. 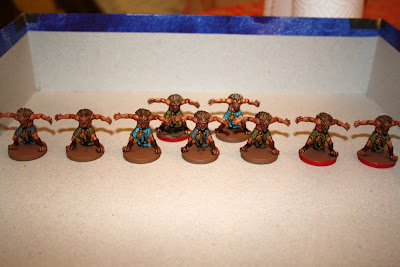 Then little washing with Devlan Mud... 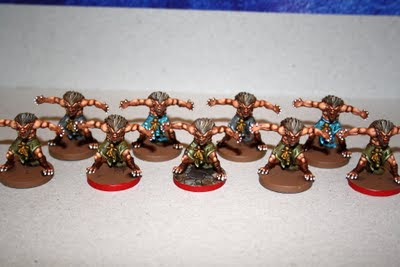 And this is how they look after the high lighting... I think they look little bit like Rob Zombie in consert... Now I´m gonna start with the bases. I´ll post again when it´s done :) Bye now..!
Posted by Alexander Man at 21:08 No comments:

Hello! I got on a side track again form my present projects, the "Dwarf Lobba" and Karak Eight Peaks scenery, as I accidentally layed my eyes on my Descent board game boxes... I decided to try and paint few of the several minis that come with the box. I thought that beastmen would be the simple choice enough to fast paint... Allrighty then, here´s the pics :) 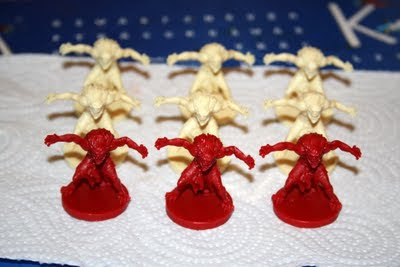 Here they are before priming... The red ones are "Master Beastmen" in game terms. Because they have different stats in the game, I decided to cover the edges of the bases before painting. 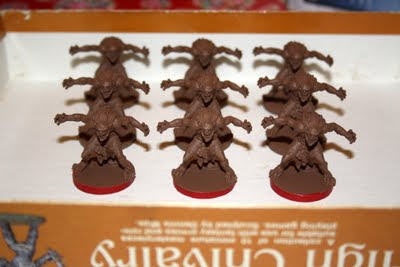 I used the Army Painter brown primer... Here you can see them after I removed the tape from the base edges. 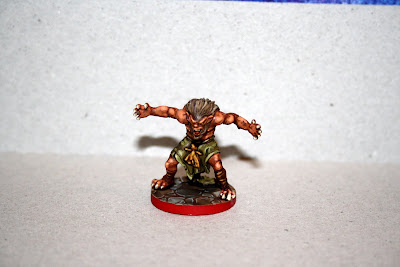 And... here it´s allredy painted. I forgot to take any VIP-pictures... Sorry! Nothing special to tell about the painting it self. I tried to keep the palette really simple. It took me about two hours to paint the mini, and half an hour for painting the base... (had to wait for that Devlan Mud to dry :) I think I can go faster with the rest of the beastmen, now when I know the colors I´m gonna use... 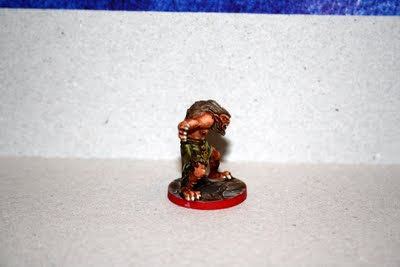 Side shot... I pretty much used flat colors on the mini, then stained it with Devlan Mud. After that I picked up few high lights, finally adding some Bleached Bone to the base color... fast and simple :) 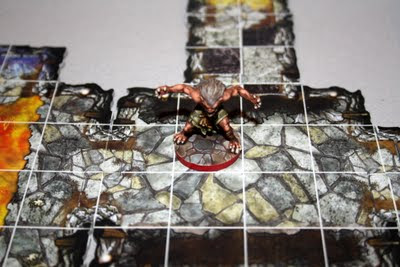 The dungeon floor themed base blends quite nicely with the Descent floor tiles... Perhaps I should paint the stone pattern little bit bigger with the next one... 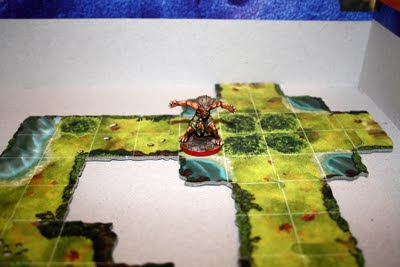 The broblem with the basing is... that it doesn´t blend very well to the out doors encounters. :(  Maybe I should base half of the minis as "out doors Beastmen" :D
Posted by Alexander Man at 18:48 2 comments:

Hello! I got my computer working again... Hooray! :) It´s been awhile since my last posting, and lots of hobby related stuff has happened after that. Most interresting for me is the starting of Karak eight peaks with our gaming group. I´ve played one and a half game so far in the campaign... (last game against the Chaos was put to rest after third round, because of the "real life" crises...) Anyways, the first game against the Empire was just Green Skin mayhem, and the dices were on my side (for a change). More about Karak Eight Peaks later...

We have also found some time with the other gaming group to play some "Descent: Journeys in the dark", from the Fantasy Flight Games. We all liked the board game very much and I´ve already purchased the "Road to Legend" expansion for the game, that puts the players to a campaign map, and allows the "heroes" to gain experience to upgrade their stats and skills etc. It´s mainly a hack´n´slash dungeon exploring action with RPG elements... and if you haven´t played it yet, you should, because it´s pure fun! I get back in this subject, if I ever start to paint the Descent minis... :)

And back to the miniature stuff... Here´s one mini project I´ve been working on lately. It´s a Night Goblin Dwarf Lobba. Still missing the basing and the paint job on bully, but i´ts starting to look nice. It´s inspired by the Karak Eight Peaks campaign... and designed to humiliate my Dwarf enemy player :) Also the Night Goblins "Hate Dwafs" rule gets a visual presentation in this project :D 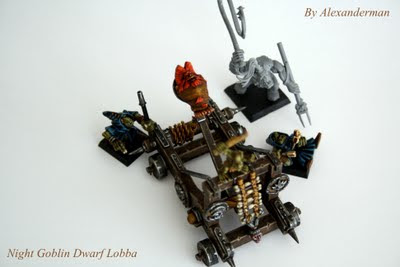 The Stone thrower is from a "Ring of Rule" game, and you can see it in it´s earlier stages from the previous postings... I´ve just added some Green Skin bits to it, and one Snotling "engineer". The crew is from Night Goblin regiment box, slightly converted... The gobbo on the right has three hits in a chest, but the Bully thinks he´ll still stand up and work, after a good whipping... "Geddup you lazy sod..." The Bully is made from a Boar chariot rider... 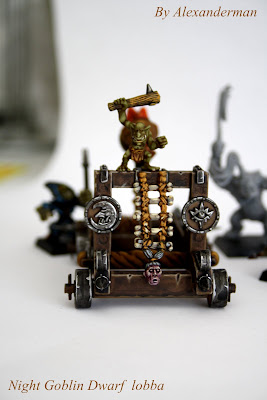 Frontal view... from the chargers eyes. 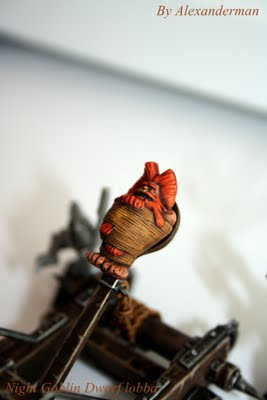 "You´re fired"... Update to the latest WHFB rules: The Dwarfs can now fly without the Gyrocopter... :D

I´ll be back with this later... and some scenery for the campaign. Bye!
Posted by Alexander Man at 00:07 No comments:

My computers busted... I´ll be posting again when I get a new one :) Lots of stuff going on anyway... Night goblin "Dwarf lobba" is almost ready with the crew and bully. That´ll be the first posting when I´ll get back.  Also we started the Karak eight peaks campaign recently. First game was wictory for my Green Skins :) Some scenery projects are also on the table for the campaign. I´ll be blogging about those (hopefully) soon!
Posted by Alexander Man at 13:06 No comments: